I have been doing spelling differently than others for while.  Even when I used to do spelling tests every week, the way the words were chosen was a little different than what is typical (personalized to each kiddo, often from their writing or frequently misspelled words that mattered to them).  We even used an actual week–not a school week–and kiddos studied from Wednesday to Tuesday.  I never quite felt, though, that what we did was effective; either kids were great spellers and they stayed that way, or they had struggles and those remained as well.  Even when they did well on tests, they didn’t do such a great job of bringing that expertise into their work.  Eventually, the last year I taught 5th grade, I abandoned spelling tests altogether.  No one seemed to notice…

When I moved to 1st grade last year, it was an easy decision to tackle spelling inside of all of the other things we were doing with reading and writing, especially during interactive writing and word work during guided reading groups. My kiddos took to this kind of thinking quickly, and used their new skills interchangeably between subjects, which is a true sign of transfer of knowledge.

So, fast forward to thoughts about 2nd grade.  This one was a little bit tricky; all of the other classes in our grade do spelling in a traditional sense of the word–lists of words each week that follow a pattern, with a test on Friday.  I was pretty sure that I was going to opt out of that choice (but for a long time wasn’t sure how to explain why without sounding like I was right and others were wrong.   I’m actually working on how to do that in many areas; my objective is NEVER to judge or sound like a know-it-all–unfortunately my passion often super cedes and that happens–but instead my goal is to share info I have, offer concerns or questions that arise, or bring up other considerations on the topic that might not have been mentioned.  Believe me, I am FAR from knowing it all!).

I found my “out” when I thought more about interactive writing this summer with my previous 1st grade team and Mrs. Ford, our Director of Professional Learning (and my longtime friend!).  As the rest of the table planned how they’d begin the structure with their 1st graders in the fall, I considered how I might build on the foundation we’d set last year and continue the same kind of thinking, pushed to a new level.  When my friend, Katie, suggested the idea of spelling investigations, I knew they were a good fit with my learners.

Much like we are already in the habit of doing with math, investigations would be centered around conjectures that students brought up about words/letters/sounds/patterns that they notice.  Kiddos were already familiar with this idea as mathematicians, and so it seemed like a natural connection.  We had worked through our first one last year as 1st graders, anyway, and it is a permanent (and well-utilized–we even used it today during a reading group!) fixture on our word wall:

So far in 2nd grade (before we started this study), we’ve added a could of other ideas to our investigations.  They are still in an informal form, as we add to them frequently: 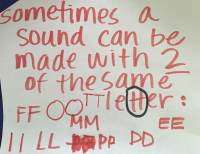 Sometimes small groups investigate them specifically, sometimes we talk about them as a whole group when we’re reading together, and sometimes kiddos just notice things about them as they are reading in their own independent work.

So why am I writing about this now, you ask?  Well, last Friday I was at a staff in-service with the rest of my district 2nd grade cohort.  We broke into smaller groups to discuss a topic we’d been working on throughout the year, and my teammate and I realized we were the only ones there!  So much for a district cohort. LOL  It worked out really great, though, because despite the fact that we work together on a regular basis, we don’t often have time to sit for a long period of time discussing one specific topic.  This day, of course,  it was spelling. ❤

As we talked about what we were doing in spelling (which is completely different for her than it is for me), questions came up about how, why and what results we were looking for, how we knew if what we were doing was working.  We agreed transfer was the goal.

I shared details about the way we had tackled spelling through our word study and investigations, and she began to wonder about how she could try something like that with her learners.  She came up with the idea of doing an investigation with students’ names.  She had experience with a similar procedure from 1st grade, but had yet to get her kiddos thinking about words/names/sounds/ that way as 2nd graders.

She put together a plan for how to start–with kiddos looking for patterns/sounds that they’ve studied (during their traditional spelling work and tests) that occur in their names.  They’d move on to making more words with those patterns/chunks, try to figure out how/why those sounds work that way, and also try to brainstorm other ways their names could be spelled using what they know about sounds.  For me, the best part of the conversation wasn’t even the plan or the ideas we shared, it was how excited she was about trying it!  There was a new energy in her related to spelling, which would of course be spread to her students when they started their own investigations.

Well, as I was also inspired by both her energy and the noticings I had made about our own classroom names, I resolved to do the same studies in my classroom as she would be doing.  We agreed to check in along the way to see what each group of students was doing; my class had already had experienced with this kind of thinking, so we hypothesized that there would be differences in what we noticed and discovered.

More on the details of Rm. 202 spelling investigations soon! (Yep, this post has gotten way too long to keep going! hee hee).  Please check back and see what we’re doing with spelling and words and what we’re discovering about sounds that can help us be better readers and writers. 🙂