Summer is one of my favorite times of year.  I love being able to sleep in and stay up late.  I LOVE traveling and exploring new places (or revisiting old, favorite places for the 20th time hee hee).  Most of all, I love the time to be able to read, write, learn and really digest new things that I don’t have time to attend to during the busyness of the school year.  I thought I’d share some of that learning I’ve been doing.  First up–math! You probably don’t know about this fabulous place in NYC called Mathematics in the City.  And if that is true, then you also don’t know about the amazing teacher leader/trainer/consultant/math guru named Kara Imm.  Man, I’m sorry for you, and want you to book a flight right now.  Seriously it’s worth every penny.  It’s ok.  I’ll wait. 🙂 So, anyway, my experiences with Kara go back to a couple of years ago when she first came to Kirkwood to help us learn more about fractions.  Yes, I survived.  I learned alot and I even had some fun along the way.  I definitely began to understand fractions in a way that I know I didn’t when I was in school.  That new understanding really helped me as I then taught my 5th graders (at the time) to truly understand fractions and what they mean, not just how to do an algorithm or figure out a formula.  She then came back a year or so later and helped us through a lesson study–again with fractions–and we learned a little more. Well, fast-forward to today (a couple of years later), and we were lucky to have Kara back AGAIN.  This time she worked with our whole staff, around many math topics, and helped us all bond as we figured out how to best help kids understand mathematics.  One thing I love about the way Kara presents is that there is ALWAYS some teacher-doing-math time.  I never did that kind of thing until I went to a writer’s workshop presentation many years ago and they had me write (which I thought was totally weird).  From that first moment, I totally got how important it is, though, for teachers to feel the same struggles and frustrations as their students go through.  We got to work through many hard investigations and work through them the way our kids would.  It was really interesting that for many of us, these problems were made harder than they needed to be, though, because of the way WE learned fractions.  Like I mentioned before, I wasn’t taught the WHY but just the HOW, which in many ways is not the easiest or most efficient/effective way to solve the problem.  So, giving this same investigation to 5th graders who don’t have a UNLEARN many inefficient strategies isn’t really that bad.  Our kids are not so confused and frustrated as we are. We did two big problems: one called Muffles’ Truffles (which involved early multiplication) and another with a scenario about Frank, a farmer, and how far he drives.  It’s a problem that involves a gas tank and figuring out (with fractions) if Frank has enough to get him where he’s supposed to go.  While there’s not really any way to truly understand the scale of our conversations and they work we did without being there, here are some notes that my partner and I used to draft our thinking.  There’s also a picture of the chart we made for our Math Congress (which is a topic I haven’t written much about but TOTALLY should!), which was a way to consolidate and present our final draft to the other mathematicians. 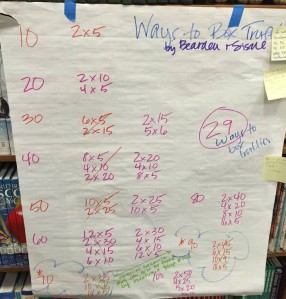 We talked multiplication and we talked fractions, we talked Math Congress (nope, haven’t written about it yet…), and we also discussed the topic of basic facts.  This is a hot topic in math these days (and for a while, really), and for many years we’ve responded with daily kill-and-drill activities, timed “mad minutes,” and crazy stressing out on memorizing lots and lots of facts.  Kara brought some info related to how important it is to respond in a different way.

For many people (including teachers, parents and students), being QUICK is best.  But we were reminded that being quick doesn’t equal being mathematically PROFICIENT, which should really be our goal.  She gave us information on how facts DEVELOP, they don’t come first.  She also helped us see that the facts (in this case we focused on multiplication tables) are not random (which is how many kiddos see them, saying “there must be 100s and 100s to learn!”), but are connected.   Seeing those connections and building on the RELATIONSHIPS between facts is how to both LEARN them and UNDERSTAND them rather than just MEMORIZE them.  For many this was mind-blowing, and for others it was validation of what we already knew to be true.  For sure, though, it was nice to be “allowed” to deal with learning facts in a different way going forward.

My notes from Day 1 of our Math Institute.

More notes from Day 1. It seems I was so busy DOING math on Day 2 that I didn’t write anything down!

One more important topic of discussion (and of course we experienced them, too!) was number strings.  In short, these are a related set of problems that kiddos use mental math to solve.  Practice is done regularly (maybe even every day), and these help mathematicians become more flexible as well as see the relationships and connections mentioned earlier.  I’ll write more about this next part later (yeah, like I said I would with Math Congresses), but one way we learned to assess newly gained knowledge is to use a two-pen test.  Yep, it’s just what it sounds like: a test you take with two different pens.  The first one is a timed portion to see what kiddos know how to do quickly, and then the second pen is used to finish the rest of the page, with whatever time frame is needed.  Teachers can get all kinds of useful information about what facts kids know and which ones they still need to work on.  Genius.  We will definitely be trying these out in 2nd grade this year! 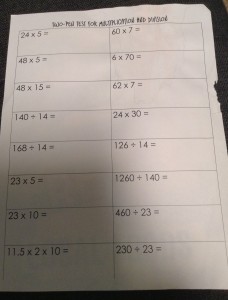 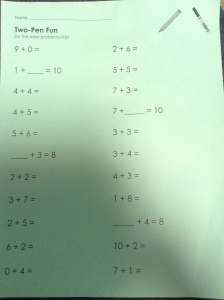 Whew.  That was a lot.  I know I tend to be long-winded, so if you hung in this long I TOTALLY appreciate you.  🙂

Now I ask you–what did you learn on your summer vacation?