In addition to finding tons of great, new books to share with my new class, I also had some fabulous opportunities to travel with my family!

Ok, I’ll give you one guess as to where we went.  Alright, you can have two or three guesses if you need them, but if you know me at all, or if you’ve spent any length of time here on this blog you already know the answer.:

This IS indeed, the Happiest Place on Earth!

We spent the first 10 days after school was out in our favorite place, which is the week we typically go because it’s not too hot yet, and the crowds aren’t as crazy as later on in the summer.  This year’s weather was a little weird, though, because Tropical Storm Andrea decided to come for a visit at the same time as we did.  It was rainier than normal (not the usual 3 o’clock shower that is over in 5 minutes) and cloudy most of the time we were there.  But hey–we didn’t let that get us down!  We’ve been to WDW many times, but we always find a way to make new memories.  Two highlights from this trip were the Princess dinner we had at Akershus Royal Banquet hall–in Epcot’s Norway pavilion–for Allie (which we actually went to on Daddy’s birthday–HA!) as well as a Pirate cruise that Riley took with a small group around Crescent Lake near Epcot. 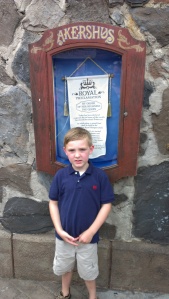 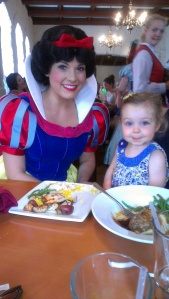 I was so surprised as how shy she was around the princesses.  Those are pretty much the only two that she would talk to–when the others came around she was buried in my shoulder hiding her face!  She did the same thing for Mickey and the others, too, which just surprised me because of how naturally outgoing she normally is!  Our prince was not at all bothered by all the pretty ladies who came to our table, though, and he took pictures with them instead!

I don’t really have many good pics of Riley’s cruise, but that’s mostly because I wasn’t there!  He took off in his pirate skipper with the tour guides and 5 or 6 other kiddos in search of Captain Stinkyfeet who had stolen the pirate treasure!  I was so proud at his willingness to do that without us (he’s learning to let go 🙂 ) and he had a SUPER time. It was all he could talk about for days afterward!

The one other highlight of the trip was meeting up with some an old 5th grade friend and his family who happened to be there at the same time as we were: 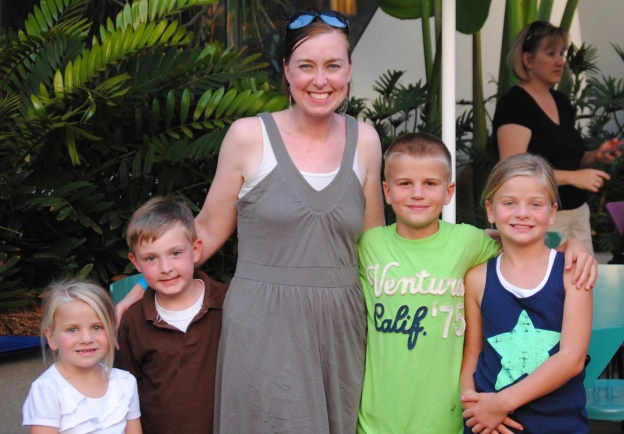 What fun to run into Keelan, his sisters Macie and Amelia and his parents! Fun in the Florida sun! (Doesn’t Riley look like he could be related to all of them?)

Disney is usually our big excursion for the summer, but this summer we finally got around to going somewhere else in the world (which is honestly a BIG DEAL for our family!).  So in July we packed up and headed east to Charlotte, NC to visit some friends who had moved there a few years ago.  We spent a lovely weekend with their family (of which I have NO pictures–I realized this after we were home…) and then headed to Asheville for the next few days.  We were excited to see the mountains, as well as enjoy Asheville’s food scene, which is focused on sustainable, local, fresh ingredients and is right up our alley!

Several days we went driving on the Blue Ridge parkway, which is the scenic route through the Blue Ridge mountains and afforded us some AMAZING views, along with tunnels and roadside overlook points to stop and check out.  We went shopping, ate some fabulous food, and also visited the Western North Carolina Nature Center.  While we’re definitely still lovers of all things Disney, this was a great time for our family and it’s the trip that Riley keeps going back to when he reminisces on his summer fun!

This one cracks me up! Just an example of the cool rocks we drove next to on the road–here we stopped to look at the water running down the walls. Obviously it was more interesting than smiling at me for the picture!

We also learned that Asheville is home to the highest point east of the Mississippi river–Mount Mitchell.  So fun to trek to the top of it!  Such beautiful views from way up there! 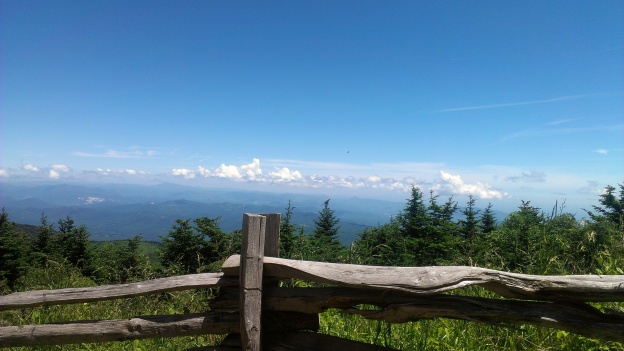 Doesn’t that picture just say it all?  WE HAD FUN!!

What did you do this summer?  What adventures did you go on?  Where did you visit?  Leave a comment and tell me all about it!  Send me a picture, 5th grade friends, and I’ll add it to the blog! 🙂

2 thoughts on “Things Teachers Do in the Summer: TRAVEL”