One of my VERY favorite thing to do with 5th graders (ok, anyone!) is teach them how to write.  It starts from the very first time I show them my own notebooks and talk about my writing journey, and continues through when they get their own (which is a very special occasion, indeed!), and then on through everything else they do (which for the last 4 classes has included blogging, too!).  I have a passion for the written word (well, and the spoken one, too; I talk WAY too much!), and want my students to see the power they have to change the world with their words!

So…as you probably know, I’ve done many of the same kinds of things with my first graders that I did with my 5th graders (the list-group-label, for instance, that I wrote about last week), and in writing, this continues to be true.  So…since one of the biggest things I miss with younger writers is the whole Writers’ Notebook thing, I had to figure out a way to do something similar (both for them and for me!).

When we came back after Winter Break, it was time to start some new things.  This is my FAVORITE time of year because of the fresh feeling there is all around–it’s cold outside, the year has just started, your kiddos are more than half-way to the next grade (so they’ve grown up a ton since Day 1!), and there’s a renewed energy because of the well-deserved rest you’ve just had.  One of the first “new and improved” things for 2015 for my kiddos was journals.

Ok, now the idea of a journal wasn’t new–they had them in kindergarten.  But they hadn’t yet had a journal with ME and learned MY definition of how to use them (which I was hoping would take on some first-grade version of the Writers’ Notebooks I love!).  I let them get really excited on our first day by reminding them of that big ‘ole zebra-print box of my notebooks.  We looked at them and read through some entries, and admired all the pictures that tell about my life over the years.  And just as I heard them say how much they wanted to have a notebook like that–VOILA!–I gave them their very own 1st grade version!  Now they knew (because I explained) that they’d be using these in a little bit different way then when they were in WNBs in future years, but they were excited nonetheless.  It was theirs, it was new and it was…ready to be decorated!  Check out what our journals look like now, all spiffied up! 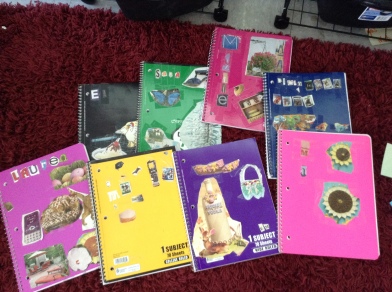 After the cover was taken care of, we talked about what should go inside.  Like with many new adventures, I asked them what they thought writers put in their journals.  We talked about why people keep journals.  We brainstormed a list of possibilities.  I have to admit–I was impressed!  They had many of the things I’d hoped they’d say, or that I was thinking of teaching them about, and heck–they mentioned many of the things 5th GRADERS put in their notebooks. Geniuses, I tell ya!

Our brainstorming list of ideas for how we could use our journals. This is a GREAT list already, and we’re just getting started!

Before they left to officially write on their first page, I modeled what an entry would like, with the date and their thinking.  Then they were off!

My hope in sharing this particular story was that, even at 6-7YO, they’d see how “journal-worthy” things happen to them all the time. A story doesn’t have to be spectacular, or big, or even special to be remembered. Even a trip to Target can give you material for your writing!

They have had a chance to write in them many times over the last couple of weeks and I LOVE how enthusiastic they are about filling them up with their thoughts!  There are times when we have official “journal writing” time, but often kiddos will get them out during a break or at choice time, which I love!  The best part was when a friend asked me the other day if he could take it home to write in it there!  He didn’t know how BIG of a deal it is to learn that writing takes place EVERYWHERE–not just at school–nor did he know how he’ll be the subject of a lesson soon when yes, indeed, they are allowed to take these babies home to work on their writing lives outside our classroom!