…or “What I Learned From Mini-Muffins and 4 Tries at Allie’s Birthday Cupcakes.”  Either way, this is worth a read, I’d say.

So first a little back story: my daughter’s 1st birthday was right before Winter Break, and so I thought I’d kill two birds with one stone and try out a muffin/cupcake recipe on my students to see if it would pass for Allie’s birthday treats.  I set out to find the right recipe; a first birthday is a big deal, after all.  (I actually hate to admit it, but I started noticing yummy things I might use last winter.  Yep, right after she was born.  I know–that’s weird.  But that’s how my brain works.) I found a recipe that I wanted to try, and made my mini-muffins on Sunday night before school.  And as I was baking, I was scripting a post in my head all about things I’d learned about how baking relates to learning, and life in general.  But I couldn’t get the words just right.  I drafted and revised and didn’t like how it sounded.

Then came Friday.  Allie’s birthday party was Saturday, and so I got out all the ingredients I needed to make A’s treats (and, by the way, I found what I thought would be an even yummier cupcake–sweet potato with cinnamon cream cheese icing!).  I had made a trial batch on Thursday, and aside from being a little hard to get out of the wrappers, they were pretty good.  Especially the icing.  They even looked good: 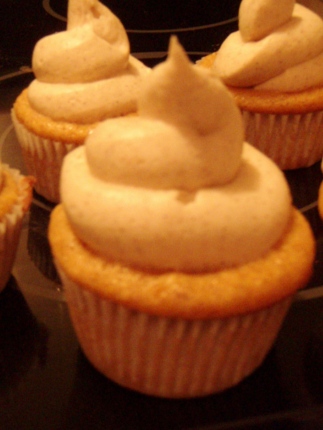 So I did some research after the last batch and figured out that probably the batter was not blended enough, and that I had under baked them too, so they were dense and hard to unwrap.  I had that info in my head as I got started tonight, and so tried to make sure I didn’t make the same mistake again.  But alas, the second batch was the same as the first, maybe even worse.  So I tried again, and these were awful, too.  So I scrapped that whole idea and started over on something else that looked a little more promising.  In the end, the new recipe wasn’t promising–it was amazing!

So here’s a short list of things I learned (or was at least reminded of) while I was baking. Enjoy!

1. Follow the directions–all the directions.  I realized as I was making the 3rd batch of cupcakes that I had left out the egg.  Made sense then, that they wouldn’t come out like they were supposed to.  Any time you’re working with a step-by-step process, doing all the steps–in order–is an important thing.

2. If it doesn’t look right at first, then it probably isn’t. The whole time I was making the first (and second and third) cupcakes, I kept thinking that the batter just didn’t look like it was supposed to.  That lead me to the next one:

3. Trust your gut. This lesson was related to something simple like cupcakes, but in all things, you usually get a feeling about whether or not something is right or good.  I should have listened to that little voice instead of having to make the same cupcakes 3 times in a row!

4. If at first you don’t succeed, try, try again! In this case, if I had quit, my baby girl would have been cupcakeless at her first birthday party!

5. If all else fails, try something else. Like I mentioned before, after those three failed attempts at Sweet Potato Cupcakes with Cinnamon Cream Cheese Icing, I chucked the whole thing and instead made Pumpkin Cupcakes with Cinnamon Cream Cheese Icing (the icing part from the first part was definitely worth saving!).  They turned out so great and were so yummy!