Remember this? We started this map a little bit ago and have been so excited to watch the pins get added to mark all the connections we’re making!

Friday was class meeting day, and so the thing that everyone wanted to talk about was our Making Connections Map.  I thought that was odd at first, because I didn’t know what there was to talk about with it.  But that’s what’s really cool about how our class meetings work (if you haven’t read about them yet, check it out here): they’re in charge of what they want to talk about, and usually their ideas are WAY better than what I would have suggested anyway. It’s there classroom, too, after all, and they know what issues are bugging them as well as I do (sometimes better!).

So it ended up that they wanted to talk about the process of putting the pins on the map.  And they wanted to talk about how I shouldn’t have to do it all by myself.  Somebody even said, “Come on, guys, Mrs. Bearden was nice enough to not give us any homework, and so we should be nice to her and take care of this ourselves.”  Love it, right?  Then they decided that since the Manager’s job (maybe I should post about our classroom jobs some day soon) to check in homework, and they don’t have that responsibility anymore, then the Manager should be the one who is in charge of adding new pins to the map each week.  Which actually makes perfect sense, since we want the map to be interactive and usually I am the only one interacting with it!  Loved the idea of how it meant they could each get their paws on it, and be responsible to find the places for the pins.  I actually though, “Duh, Mrs. Bearden.  You probably should have thought of that initially–it’s kind of the point of the whole project.”  But now it’s even better because it was my 5th grade friends who reminded me of this fact.  Thank you, friends.

Another decision they made–which I agreed with again–was that our map was entirely too small!  We had so many pins already and they were all on top of each other.  Just St. Louis alone had about 6 or 7 because we marked them as each individual town.  So we found a bigger map and hung it up and we LOVE IT!  Check it out:

They decided to move it to the other side of the room to that big wall by the door.  It’s easier to get to, and it’s somewhere we’re always walking by, so we could look at it and talk about it really easily, too. 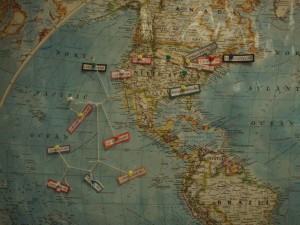 Most of our pins right now are in the US and Canada, and our new map makes them much easier to see.

It might look like we have a lot of blog followers in the middle of the Pacific Ocean (or like my map friends don’t know where Missouri is!), but those are actually linked to a pin that’s on St. Louis.  We had a really interesting conversation about how we could label our own hometown in all of those ways.  So far we have blog commenters from St. Peters, Florissant, Fenton, Webster Groves, Crestwood, Kirkwood, and Bel Ridge–all part of the metropolitan St. Louis area.

But this still might be my favorite pin.  Courtesy of Judy McKenzie in New Zealand.  Check out her class blog here. 🙂