We ended our first quarter this week, and also our first chunk of fun in our #classroombookaday challenge.  We ended up with 142 books in our first 9 weeks together and WOW were there some good ones!  Here’s our wall as of October 13: 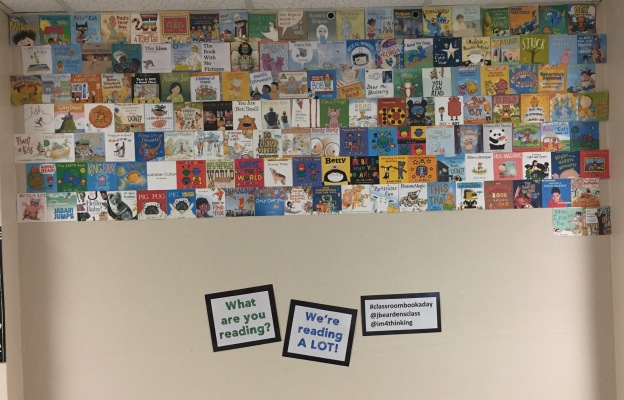 We must have been busy doing lots of other things (including end-of-unit assessments I guess), and only read 10 books this week.  Here are the highlights: 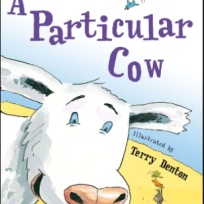 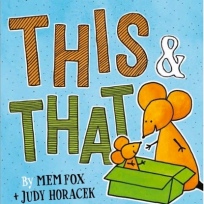 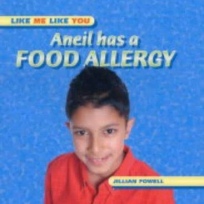 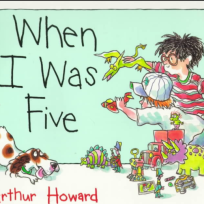 We were in Week 2 of the Global Read Aloud this week, and so Possum Magic was on the top of our list. 🙂  We also added in This and That and also Particular Cow by Mem Fox.  As we like to do, we added in more books by authors we already know, and so we read My Teacher is a Monster by Peter Brown and The Incredible Book Eating Boy by Oliver Jeffers.

As we were studying light and sound in science, we read The Energy We See.   This week was disABILITIES awareness week in our school, so we read Aneil Has a Food Allergy, as we talked about physical disabilities on Thursday.  The Amazing Autumn book was just for some fall fun, as was the book When I Was Five.  Lastly, we added another Show-Me Award nominee to our list, and read Fur, Fins and Feathers: Abraham Dee Bartlett and the Invention of the Modern Zoo.

Whew!  That list makes me a little tired and a lot happy!  Here’s to adding even more to the wall this week as we start a new quarter of reading and learning together!

And just because I’m always thinking about numbers (and reading, too) I figured out 142 X 4 quarters means we’ll be at 568 (or so) and that beats last year’s number!!  Here’s to continuing to share amazing books with amazing kids!

I figured out today why I have such a hard time deciding what to write on this blog: I like for things to fit nicely into categories/tags/subjects/projects, and so often, the things we do around Rm. 202 are not that way.  I find that maybe I’ve gotten to that place where many of our subjects overlap–just like I’ve always hoped they would!  I know, that sounds like I’m not doing it on purpose (which of course I am, as I carefully plan how and when and why), but I think sometimes when you’re in the middle of something you can’t really see the big picture (isn’t there some quote about forests and trees that would fit here? LOL).

So as I think about how to describe what we’ve been doing in Writing lately, it’s hard to explain just the writing part, because it includes reading (which is perfect, as those two subjects go hand-in-hand anyway, right?).  We have been working on writing opinion letters, with most of our topics being about the series books we’re reading in our book clubs.  Luckily, though, there are lots of other things to have opinions about, so we’ve been trying out that structure with other topics, too.

We’ve gone through many versions, with me teaching mini-lessons and kiddos then trying out the big ideas.  We’ve talking about format of a letter; stating opinions; adding reasons as well as details and support for those reasons; using transition words like one reason is, another reason is, last but not least (which many kiddos were doing already just based on learning them last year!); as well as just using interesting words and making our letter match our audience.  The procedure became that they would write a letter, but then rather than actually delivering it to that person, they’d give it to me, and I’d note what they did right and what they could work on for next time.

We wrote about books, 100th Day of school suggestions, ideas about why their weekends were good, as well as many other things about which you could have an opinion.  I was noticing, though, that over the last few weeks our letters had been getting shorter and less detailed (which was obviously not the goal!).  We had a class meeting and Millie suggested that the reason this was happening was because they had written so many letters that actually they were getting really sick of it and weren’t trying their best anymore.  While this was sad, I totally saw how that could be, and as impressed by her insight.  Others agreed and so I made a plan that we would work our hardest to create our best final letters (to Mrs. Meihaus, our librarian, about our vote for the Show-Me Reader Award) over the next 3 days and then be done.

So as I thought about what we would do for those next 3 days, I knew I needed to give another model to my writers about what that letter should look and sound like.  And since I wanted them to write about books, I did, too.  My letter was about my favorite read-aloud choice, Fig Pudding by Ralph Fletcher.  It looked like this: 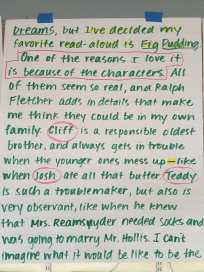 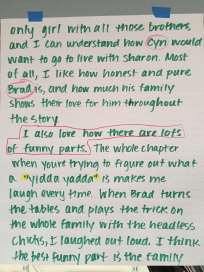 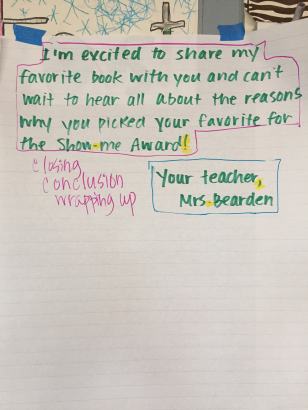 I had hung the letter up there before the day started, and it was one of the first things (thankfully) that kiddos noticed when they came in.  Yeah, the first response was “Wow, that’s long!”  Later on, I had them look at it, studying it to answer this question: How do I write a STRONG Show-Me letter?  Not surprisingly, they were able to notice a whole page full of things that I had in my letter that they needed to put in theirs.

As they made their list, I marked their ideas on the actual letter (notice the different colors and the things we boxed in) so we could reference it later.  I was impressed to see that they had been paying attention, and that they could come up with that all on their own!

After this, I gave kiddos a graphic organizer to use to plan their letter and we got busy.  We’re almost done, so I’ll share our progress in the next few days.  It’s pretty good stuff!