I mentioned in my last post about Going Places that there was an awesome “learning buzz” that happened as we worked hard and focused in on our building projects.  Most of the kiddos were on task, planning, collaborating and creating for almost 3 hours!  This was the first time this had happened (which now I realize might be because I haven’t offered many opportunities like this…but that’s for another time), and students noticed it.

After we were mostly done, we gathered on the rug to talk about how things had gone–what worked well and what we would change for next time. 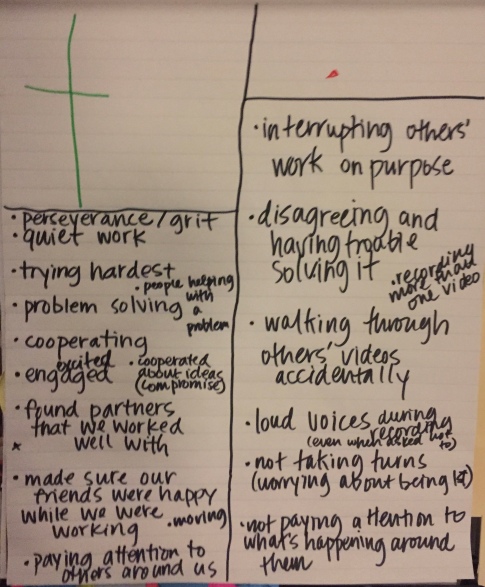 As is usually true, the sides look pretty equal (as far the number of things that were mentioned).  But what I know, because I was there, is that most students are represented by the items on the “plus” side of the chart.  While it doesn’t mean the “deltas” aren’t important, it does give me even further hope that we can quickly fix these problems; they are only happening with one partnership here and there, and others are ignoring the unexpected behaviors.  That’s another thing that kiddos are getting so much better at by this point in the year–focusing on their own work and not joining in on the silly things their friends choose to do instead of what they’re supposed to do.  Don’t get me wrong, they might notice–and even invite their friends back to work or remind them of what to do instead–but then they get back to their own thing and carry on.

I’m excited to see what this group can do again soon (and actually I guess I did, since Mrs. Sisul’s Snowman Challenge happened after this one and went equally well), particularly with allowing them to lead the direction on what they want to learn and how they want to show their new knowledge to the world.  Stay tuned for that, will you?? 🙂