I am a teacher who works with first graders, so we do LOTS with words.  Reading words, writing words, learning about how to say words, discussing meaning of words.  Words. Words. Words.

So…in the beginning when I was putting the room together, lots of thought and consideration was given to how we’d use our word wall and where it would go in the room.  Ms. Turken and I also had many conversations about how we could use our walls in tandem (as our kids would be going back-and-forth between our rooms often and would be utilizing both versions).  Last year, I also had a rebirth of the word wall, and abandoned the whole “traditional” layout (with letters and sight words) and we put words in categories rather than by alphabetical order.  Kids in Rm. 202 used that version of the wall SO MUCH MORE because it was theirs.  They had ownership over how it was organized and therefore were much more purposeful in how it helped them. 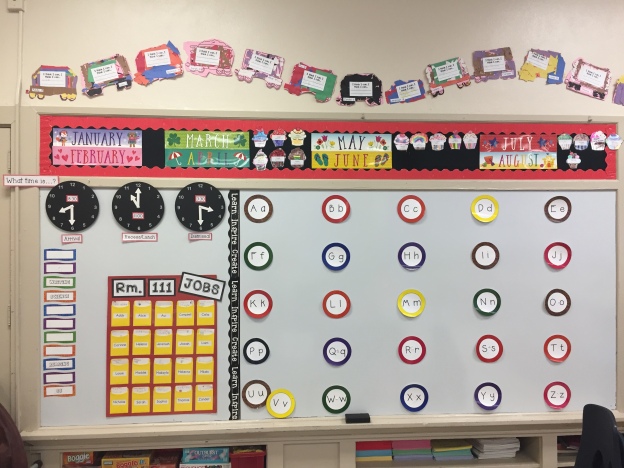 And next to it, to the right, is another wall, that has been predominately “blank”, as well, except for names (which some kiddos just noticed last week. LOL).  This set up is almost identical in Rm. 112–on the same wall, even–just with different colors.

Today, for many reasons, became the day to tackle the word wall discussion.  For one, kids have had some time to “live” in our room, as well as in first grade generally, and so have more of an understanding of what more they might need as far as resources.  We’ve also just officially started word work as a Daily 5 rotation, so they are more aware of how this aspect of reading and writing in first grade.  We’ve been reading for almost a whole quarter now, and have been working out words, and are far enough now for an “official” lesson about what to do with unknown words in Writer’s Workshop.  It’s to the point now that we have to address where to go when you don’t know. 🙂

We gathered in front of the blank word wall today and had a discussion about what it might be for.  Many pointed to the fact that we’ve been utilizing it to help us write our letters when we forget what they look like, or what order they go in.  Many were happy to leave that silly wall just as it is!  I pushed, however, and talked about how I’d overheard several kiddos talking about how they needed help with how to write (spell) specific words today, and suggested that maybe we could use the spaces (between the letters!) for words.  They seemed keen on this idea, and many suddenly remembered that they had a wall like that in kindergarten! (I tell, ya, those kindergarten teachers think of the BEST ideas! hee hee)  We discussed what kinds of words we should put on our wall and many threw out words they’d been trying to use today, and someone suggested we  add sight words to our wall.  The thing I loved about their thinking (unlike many years, and in comparison to the way I’ve used word walls previously) is that they agreed that we should put up words they DO NOT know how to read and spell yet, rather than ones they ALREADY know how to use correctly.  This is the part of the typical Word Wall that always had me confused anyway: I used it as a wall of “have-tos” and held kids accountable for words they already knew, rather than effectively helping them work towards ones they didn’t have control over yet.

Additionally, many suggested that we routinely COME BACK to review the words on the word wall to siphon out words we had learned (and didn’t need anymore), adding new ones that kids needed to rely on.  BOOM!  Not rocket science, but this was the very first time I’ve ever had a learner attend to the “living” nature of the word wall.  It’s the first time I had done that, too.  WOW! so thankful that happened.

In past years, I have decided on what words we would learn and add, based on a list or suggestion from someone or somewhere…sometimes relying on my kids to lead me (I’d say I did more of this student-led work last year more than ever), but often just at random.  Waa waa.  Super teaching strategy, right?  It didn’t hurt anyone, and kids eventually learned how to read, write and use those words, but of course there was a better way of doing it than just so haphazardly.

Since Rm. 111 kids would decide which words to add, we originally had a plan for each kiddo to tackle a “letterful” of words, leaving the remaining ones for me to choose.  Campbell suggested that we determine 5 or so words for each letter that we wanted.  The time of today when we could work on this didn’t allow us much time, so I tweaked the idea a little and we worked with our learning partners.  In the end, I think this worked out better anyway, as kids had to more deeply think about and defend their choices than would have been required if they just chose on their own.  As they finished with their first letter, pairs tackled others and we got almost finished with our choices today (up to the letter R, I believe…).  When our work time was over, we had a tableful of possibilities.

It was really interesting to see what they had come up with, and made me think about how I’d chosen focus words before.  I am pretty sure I never had contractions up there so early, and the wall was full of 2-letter words for months.  As I reviewed the words they decided upon, I saw MANY MORE connections between words than I’d allowed for previously, and noticed many ways that words could be used to spell other words that I hadn’t ever considered.  First graders are so smart!!  I mean, really–so often they know what they need much better than me! 🙂

I did end up revising their lists a little, taking out words that could be figured out with longer words.  For example, I left CAN’T but took away CAN, as we could use the latter to spell the shorter one.  Same with most of those contractions, as well as the word BE, since BECAUSE and BEFORE were also there.  Also, some of their word choices were colors and numbers, which will go into category boxes (much like last year’s wall) on that black board on the right side.  We’ll discuss this and how to use it a little later.

I didn’t get quite done today, but am already really excited to see all the words that are hanging there now, and am happily anticipating how the wall will be used by my Rm. 111 (and 112!) learners.  I am excited for the newly gained confidence that I will see emerging as kids can add another layer of  independence to their literacy work.

Oh, and by the way, when I asked them what we should call this wall of words, they suggested we put the title WORD WALL on it. 🙂  hee hee (and see–there’s even a lesson in that title: I did not leave CALL or ALL on the list because they are inside of WALL). 🙂