We have been on a roll with warm-ups lately, and maybe since we’re still talking about many different things, they’ve given us a way to keep all the balls in the air.  Love that.  Enjoy! 🙂

One of the topics we’re working on right now is the foundation of fractions, and understanding about equal parts.  This warm-up led to a GREAT conversation about how 1/5 is always a 1/5, but the actual portion that is being considered changes based on the whole.  Oh, and we were all hungry when we were finished. 🙂

It seems like addition and subtraction is a never-ending concept with 2nd graders, and we’re still working on it.  Oh well, as long as it takes.  School year’s not over yet and they can get it! Here was another opportunity to practice. 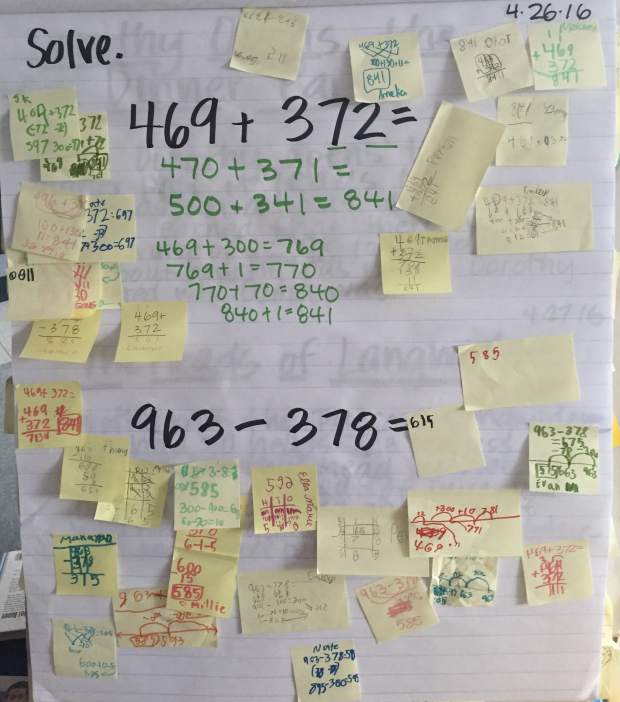 Ok, so I need to explain that that picture is a pizza, not a target.  It’s based on a picture we had looked at the day before in a math conversation.  It was based on an 8-slice pizza and how we could share it fairly if twice as many people showed up for our party.  This was the way one group suggested we do it, and we had to discuss whether we agreed if it was fair.  Which piece would you want? 🙂

We had a FABULOUS walking field trip on Thursday at the time we normally do math warm-ups, so didn’t have one that day.  We had a great day in the park and a movie instead! 🙂 (Don’t worry–it was connected to our curriculum!)

Another topic (which I found a way to weave into this conversation, too!) is the foundation of multiplication.  We told many stories of groups of things with this one.  Great thinking, Rm. 202 kiddos!