Remember our Mystery Skype last week?  Well after that AMAZING experience, the first things that came out of my kiddos’ mouths were “When are we doing this again?”  That meant that I had to get busy because I needed to schedule another one for them! I tweeted out a request and quickly I got many requests.  One of them was today.  Here’s the story. 🙂

We are all about learning in Rm. 2o2 and so the first thing we did was reflect on the experience from last week and talk about what had happened.  I showed them the blog post I had written and asked them to think about what they saw.  We analyzed the photos and talked about what we would do the same and what we would change.  Some noticed that there were not pictures of everyone, and we agreed that the next photographers would make sure to get images of each job that we had on our list.

Next I showed them the video from our first try.  We did the same analysis and noticed somethings we could change.  Many of the “issues” just came from the fact that this was the first try at something like this for our videographer.  We talked about some technical things like shooting at people’s faces (and not their legs and feet), not moving the camera too fast (because it makes the watcher d-i-z-z-y!), not talking over the recording  and making sure–just like the photographer–to get the WHOLE room in the video.  We made sure everyone knew that we were only working on how to make our next try even better, not saying that anybody did anything wrong.

It was time to pick jobs and so we sat down to decide what each person would do.  After our debrief from last time, we had decided to add in Tweeters (check out the AMAZING job Mrs. Sisul, Ja’Mia and Makayla did today!) and Closers, so that made just two people doing each job.  Rather than the chart we made the first time around, I thought I’d try to start digitizing some things, so I made our job list in a Google Doc like Mr. Solarz’s example.   I just made a doc that we can add pages to for each MS (at least that’s my plan for now) so we can keep track of who’s done what during each session. 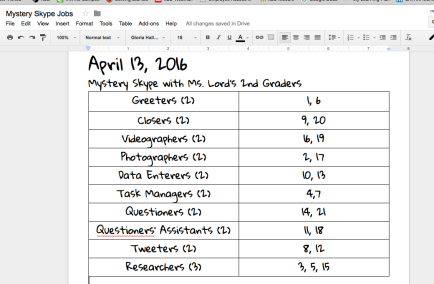 I hope to start using a Google Doc for questions next time, too.  For today we hand wrote them and I entered it into the table:

We had to go to PE right after this, but before we left, we agreed we should get everything set up, since we only had 10 minutes from when we got back until we got started.  I was SUPER pleased that this was what I saw them do: 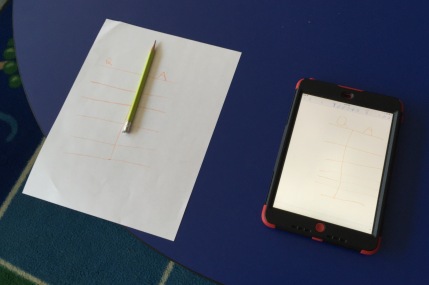 The Data Enterers had their area ready, the maps for the Researchers were laid out, the chairs for the Questioners, Greeters and Closers were in place and the Photographers and Videographers had their iPads raring to go!  Isn’t it amazing what 7-8YOs can do when they are motivated and have a purpose? LOVE!

Here are the photos we collected from our session today:

And the video.  Don’t worry–this one’s a bit shorter than the one from last time.  And you should get sick and dizzy either.  At least I hope not. 🙂

Then, when we were finished we sat down to debrief.  We said many of the same positive comments as last time, but I noticed many kiddos were a little unhappy about their jobs this time around.  Well, some of them were.  When we went through the assigning of jobs, obviously some kiddos got the one they wanted, and the others didn’t.  We talked about what to do about it, and we were divided about how to fix the problem.  We suggested that we could stay with our original jobs, since we felt that we had done a great job of finding the right person for each one (which we had agreed upon after we finished the first time around).  Not surprisingly, not everyone liked this idea.  We also considered just staying with the new ones we made today, since we didn’t really have time to reassign before our next scheduled Skype tomorrow morning.  Again, not everyone agreed this was the best.  Then, someone quietly suggested that we could trade.  He said, “What if I want a new job and so does someone else. Can we trade jobs?  That might work.”  BINGO!  Everyone loved this idea and so we quickly had the “traders” meet on the rug and most got a satisfying trade out of the deal and walked away happy.  Unfortunately, since there was an odd number, one person did have to stay with a job they don’t really like, but I’m sure it will all work out and next time she’ll be able to try something new.  Oh, and I had forgotten until now, but I would be remiss if I didn’t mention that one of the reasons someone gave for trying new jobs every time was “I like to make mistakes so I can learn something.  That happens when you try new things.”  HA!  Pretty amazing, right?

And you know, as fun as this is, and as much as it reinforces geography and inquiry and does loads for engagement and motivation, I just love watching what happens when you get out of the way, let kids do their thing and they run the show in ways that are far beyond what you’d think the realm of 2nd graders would be.  But then again, I continue to see it over and over, so I should stop being so surprised, right? 🙂