I have three warm-ups to share this week.  We had a surprise snow day (which was a little funny because where I live there was no snow!) on Wednesday, so no warm-up that day!  We are in the middle between our money unit and addition/subtraction up to 1000, so the problems reflect that.

As we discussed this problem, we tried a similar one: 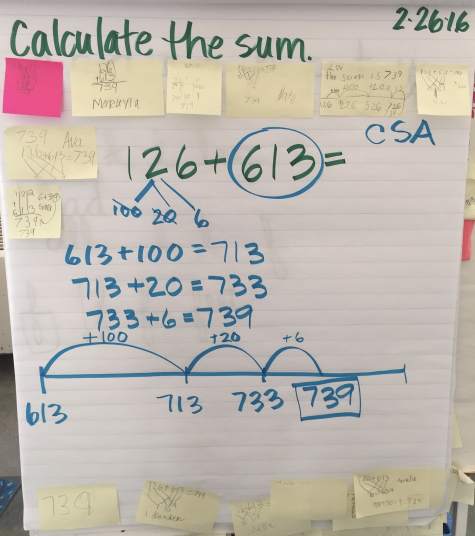 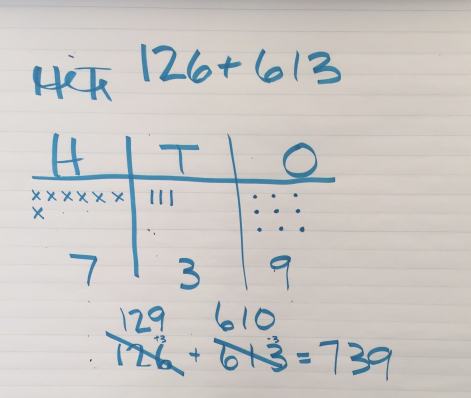 We modeled the solution to this one in three different ways (which we related to the ways we had done 2-digit addition earlier this year).

Ok, now for a confession…I was surprised when my kids made some of the connections they did this week between money and 3-digit addition.  I know, right?  Probably shouldn’t happen that way, but it was honestly something I hadn’t really noticed, or at least thought about it as specifically as they did.  I think it was nicely pictured in the problem from Tuesday, where we solved each problem in red–they made connections between how you can add whole dollars just like the hundreds in the 2nd problem (and that’s just like 100 cents, making the amount with pennies); the tens were dimes and then the ones were pennies.  Ok, so that part is not surprising to me–obviously I have this knowledge as an adult–but I honestly didn’t expect kiddos to use this to help them solve the 3-digit addition.

It went even farther yesterday when I had a kiddo working on a pre-assessment for this next unit and was doing the problem 451-238.  He told me he needed the money bag so he could use coins to help him.  Since I always allow kiddos to use whatever manipulatives or strategies they need to figure things out I said “ok,” but I honestly was thinking this would hinder him more than help him, or that he’d end up more confused.  When we first looked it he seemed confused with how he’d subtract 8 from 1 (which told me he wasn’t really solid with regrouping yet).  He started by making $4.51 with half dollars, dollar coin, dimes and a penny, and seemed a little unsure about it as this point, too, asking me about names and values as he made his amount.  But once he got his $4.51, he could easily take about the $2 from $2.38, as well as the $.30, which he did with 3 dimes (and I wonder if he made that $.50 that way on purpose since he could think ahead to having to break it apart later on).  Then he sat with only 1 penny, and the need to subtract 8 cents.  And so yes, here’s where the money came in handy–the concrete nature of being able to think about trading a dime for 10 pennies (which is what he is doing abstractly when regrouping) helped him see the constant value and how he could then actually take about the 8 pennies (8 ones) from what was there.  He then counted the money he had left and told me it was $2.19.  We then talked about what that would be if we were just talking about hundreds/tens/ones instead of money and by drawing it in a chart he eventually saw it as 219.

I’m excited to see how this connection to money plays out for some of my friends who need to actually hold/touch/feel the addition and subtraction.  Yes, it’s something we’ve done with other kinds of math tools and strategies, but I wonder if this might even be the best connection, yet, since it’s all based on place value anyway.  Oh yeah, and maybe that’s why this unit was placed after this one in the sequence….

The conversation around this problem the other day was the kind of thing that reminds me that I don’t know everything.  Obviously I know this, but it’s refreshing when kiddos remind me that they are figuring out things I hadn’t thought of.  I love sharing with them those moments, too.  It reiterates the fact that I am not the only teacher in the room, and that I have things to learn as well as they do.  And I hope it’s a lesson that all of us will remember–and use–for days to come.