I mentioned on the math warm-ups post that we had been working on place value, and that mathematicians had a challenge to figure out how many sticks were in a big ‘ole pile.  They were given a small group (their partner plus another partnership) and two questions: How many sticks do you have? How can you count them in a way that will be easy to show someone else what you’re doing?

Each group was given a pile of popsicle sticks and they got busy!

A group collected bundles of ten in their box as they went along. 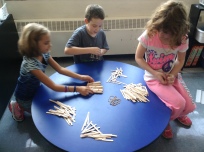 As I went around to each group, I asked how they had decided what to do, and how they were determining how many sticks they had.  Most were bundling in 10s (yay!) and I nudged them to make an even easier way to see how much is in a big pile.  Could they continue to bundle and make a bigger group?

In the end, most groups ended up with bundles of 100, some 10s and–if their pile had any–some leftover 1s.  They put their collections back in the tubs, and marked how many they had with a post-it note.

Then we worked for a bit on how to model the numbers we had made.

The next step was to figure out how many we had altogether.  Many suggested that we could put our bundles together, but weren’t (at first) sure how to do that.  We talked about how they had made their 100s bundles–with 10 10s–and then guessed that we might be able to make some more 100s from the loose 10s in everyone’s tubs.

Left with a massive pile of 100s, that eventually led us to thinking there must be a better way to show how much that pile had in it.  I asked if they thought we could bundle any bigger numbers and honestly most of them thought I was crazy!  I just began collecting 100s in my arms and counting: 100, 200, 300, 400….and they got the idea.  They going until they got to…10 100s!  That was a great conversation next about what number we had just made.  10 100?  We figured out that it was a 1000, and that when we said “10 100” that helped us know about how many bundles were inside, but that it wasn’t the right way to say the number.  We stretched a big ‘ole rubber band and made a 1000 bundle!!  We counted the whole thing and agreed that we had one-thousand, four-hundred twenty-six sticks!

But how in the world do you WRITE the number one-thousand, four-hundred, twenty-six?  We gave it a go.  Many of us remembered that when we went from 2-digits to 3-digits it was a 100s number, and since we had 4 groups of sticks, maybe that meant our number had 4-digits…

Many minds were blown as we figured out how many 100s and 10s were inside that big number.  We figured out that it was actually than just what the digit said, because of all of the groups inside of groups.  I loved how many kiddos kept saying, “Wow, this is fun!” and “Man, we’re learning so much today!”  Definitely lots of great mathematical thinking happening here!

UPDATE:  I got this email after the first posting of this story.  Love this stuff!  Thanks for sharing, Shannon. 🙂

Hi Jennifer!
You had so many math posts on the blog this weekend, that I wanted to share a story with you.  We have a Curious George story CD in the car that we listen to a LOT and in one of the stories George gets 10 dozen doughnuts.  The other day when this story was on, Millie asked me if 10 dozen was 120!  I was so surprised!  I said that it was and asked her how she knew that.  She told me “5 2’s are 10, and then another 5 2’s makes 20 and 10 10’s is 100 so, 120”.  It took me more than a minute to follow the math just because it wasn’t how I was used to thinking of problems, but she was totally right and I saw this “new” math stuff in action :).  It was kinda cool!  She was doing multiplication and didn’t even know it.  Thanks for teaching her such great foundational skills that allow her to do these kinds of problems in her head!