I hate that I don’t have dates on these.  That’s what happens when you get too busy to post them in the week you actually did them!  But hey, it’s better than they’re here, right?  These were from the last couple of weeks of school.  We’ve been studying volume, which I hope you can tell from the questions I asked. 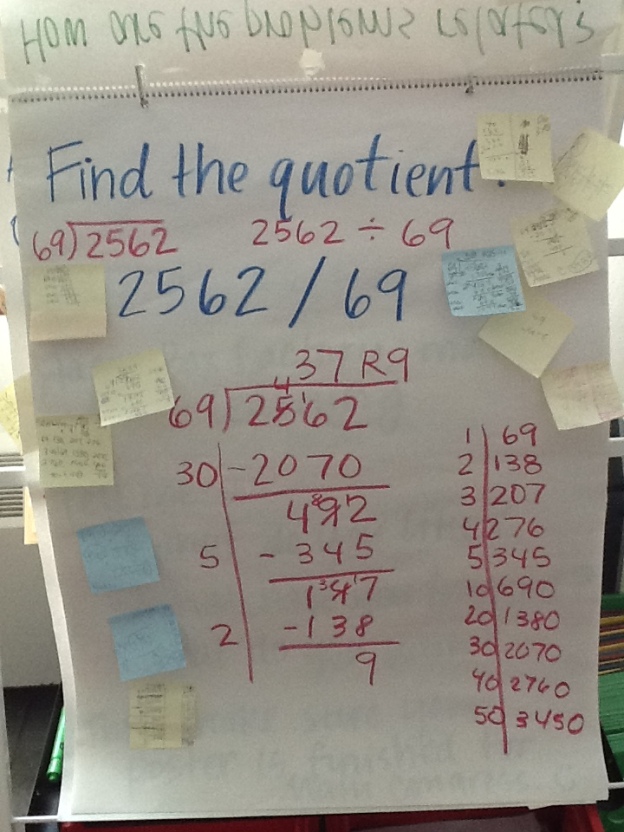 This was one a review at the end of a division unit that we just did.  Needed to double check that they hadn’t forgotten how to do it with 4-digit numbers! 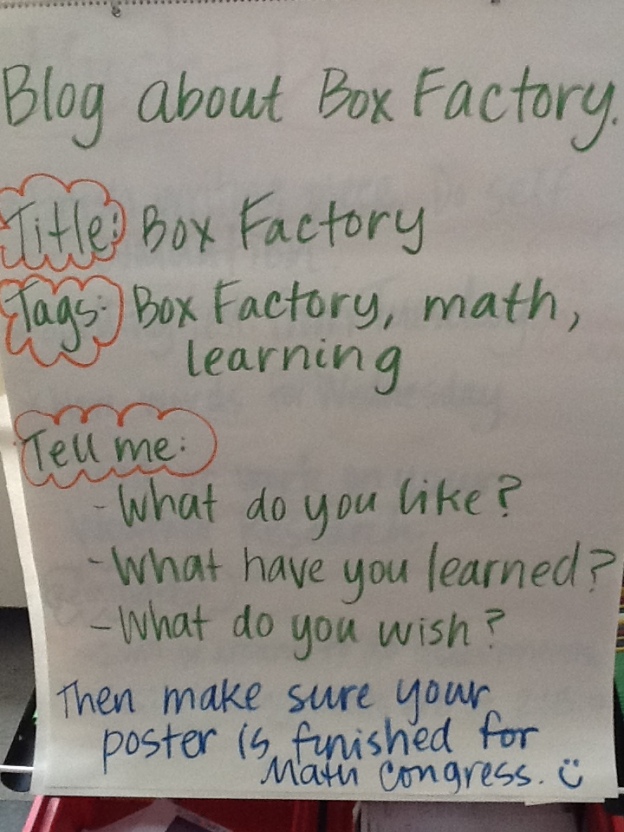 This one is a great example about how we use our blogs in every subject, and on this day we were writing about math.  Box Factory had given us much to talk about, and this was their chance to show me what they’d learned.  Be sure to check out what they said on our blogs.  They used the tag Box Factory to organize these posts.  The second day this one was up, I added the last part, since some needed to get ready for Math Workshop later in the day. 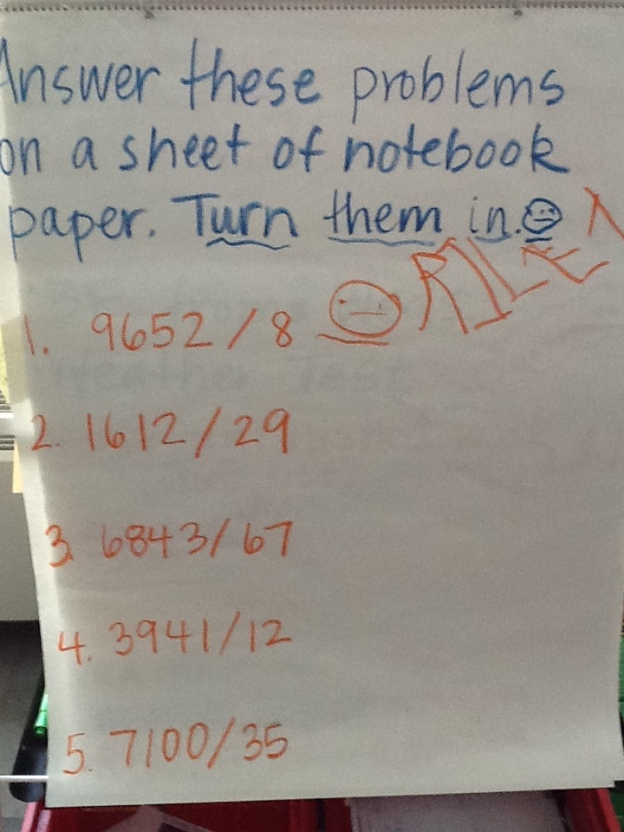 My son, Riley, who is in kindergarten, go involved with this warm-up.  He has been working on drawing smiley faces, as well as learning to underline, so he wanted to put his mark on our chart this day.  Again, we went back to division for added practice. 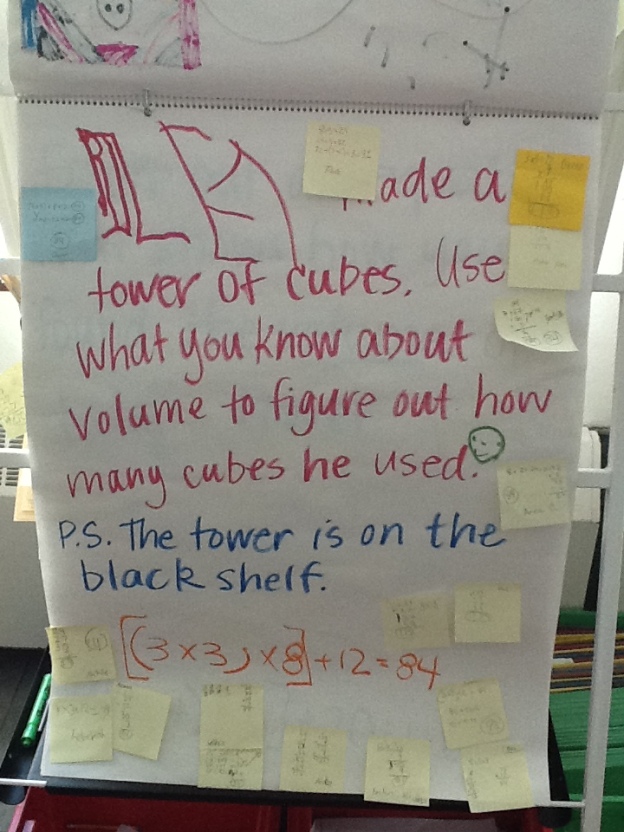 This one was an extra special warm-up, because it totally came up by accident.  The backstory is that a few days before, Riley had been building with the multilink cubes in our room and created this tower: 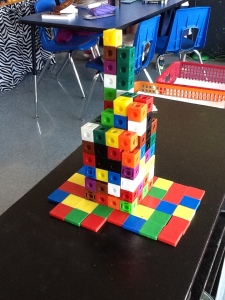 The more I looked at it, I thought it would be a great extension of the volume work we’d just done.  My hope was that kiddos would see that they could use the formula for volume that they’d just learned to find how many cubes were in the main rectangular prism and then add on the top “extra” ones.  And that’s exactly what they did.  (And again, you see Riley practicing his teaching–and writing–skills as he contributed to making the chart.) 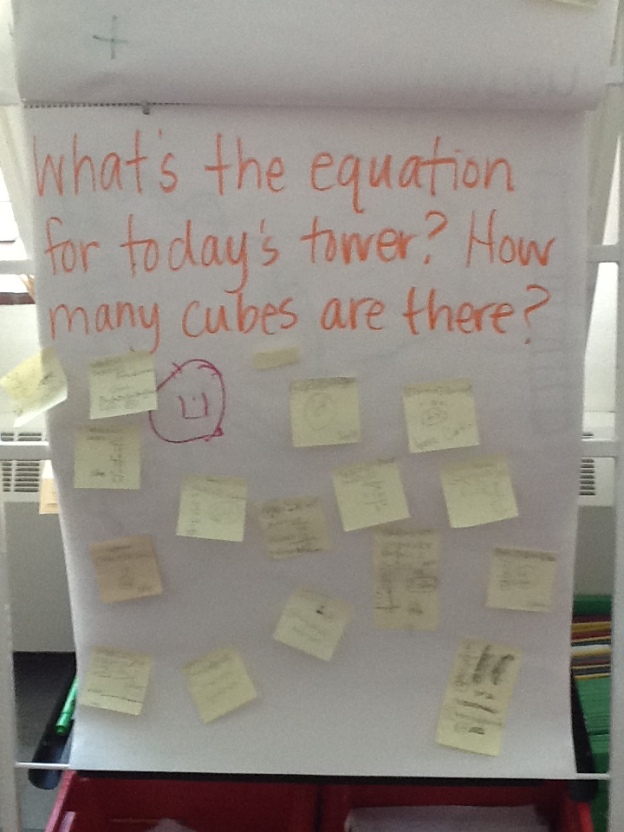 This was the next day, to give them another similar type of tower.  This time it looked like this: 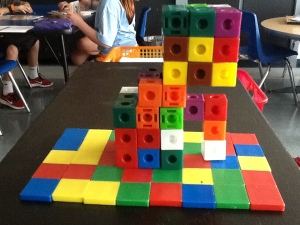 Similar idea, too: there are two big prisms, plus a little one that is 2 x 2 x 3 in the middle, then those 4 extra ones on the side.  Again, my friends did not disappoint, and figured out how they could use what they already know to figure it out.  Riley was very impressed with their smart thinking, and was eager to learn what they had figured out when I picked him up at the end of the day. 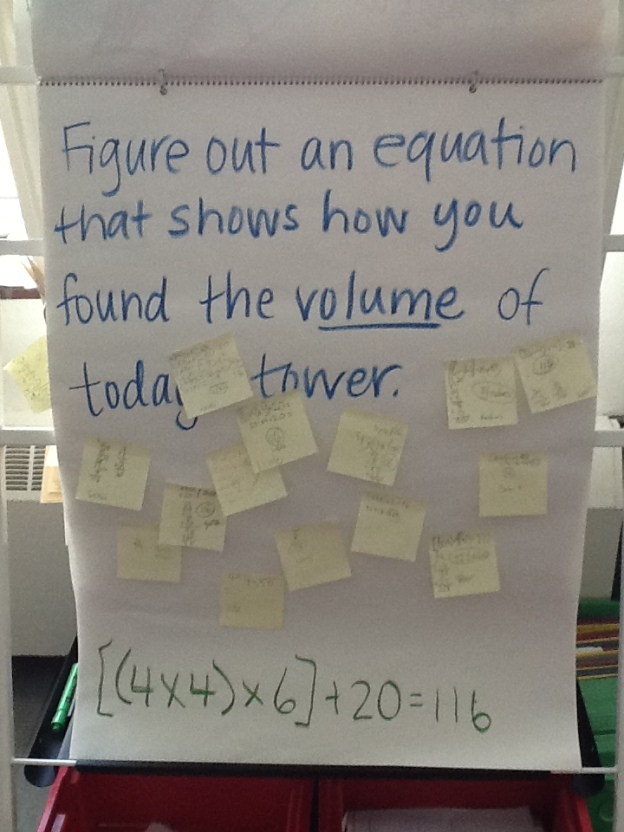 There was one more tower–which I guess I didn’t get a picture of, sorry!–and the focus today was really more on how to write what we did, how to record the thinking when you do it in steps.  This connected really nicely to all the work we had done previously with grouping symbols and order of operations.  Love that!

Stay tuned in the next few days for this week’s warm-ups.  I promise I won’t make you wait as long as you did for these. 🙂