Today we were finally able to revisit our initial list of ideas for our own Rm. 202 Pirate Code.

We used a protocol called Walk, Stop, Turn and Talk (which I saw on Twitter this weekend but sadly can’t remember who to credit for the idea) to talk about our thoughts on the first try.  Kiddos walked around until I called “stop,” in which case they turned to the closest friend and talked about which options on the list they thought should be kept.  They were supposed to give reasons based on how that addition would help us learn like pirates (based on our answers to that question which we had recorded the other day).  It looked and sounded like this:

Here’s our revisions, and then a “prettier” copy of the changes: 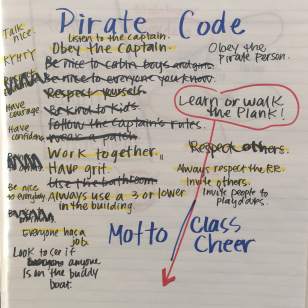 Pretty good, huh?  Oh, and that red part is that we decided that Learn or Walk the Plank! should be our Class Motto.  Verdict’s still out on that one. 🙂

I wrote the other day about how we’re undergone a little bit of a mutiny in Rm. 202.  Don’t worry–it’s all good. 🙂

I realized on Friday that I have a couple of additions I need to share!

I mentioned the first conversation we had about their initial answers to the question “What does it mean to learn like a pirate?” and since then, as we finished our read aloud (Pirates Past Noon), we put some other things on our list that I thought were exceptionally “pirate-like”:

I was impressed by those last two additions, as they are really two of the things that are really at the heart of what I was hoping for when I brought forth this whole Learn Like a Pirate idea in the first place.  The fact that they also identify that working together is a big deal was a big deal to me.  The explanation that went along with that suggestion was that if we don’t work as a crew, then our ship will sink and that will not be a good thing (we even talked about maybe naming our room like you would a boat–guess we’ll see!).  The last one–share our treasure–was both a good idea and a poetic addition as it could mean os many things; “treasure” has so many definitions, both tangible and abstract.  We could apply it in so many ways. ❤

I don’t remember if I mentioned it in my first post, but what came next was a natural progression (but again something I was hoping would come up!).  Baron and Khalani were reading a pirate book and found a place where it talked about a Pirate Code that should be followed.  They came to be, flabbergasted, as they read things on the list like: Never be kind to mermaids.  Never be kind to anyone. Always carry a cutlass. Always look fierce. Then at the bottom the motto was listed: Rob or rot!  My friends were concerned because they knew that these were definitely NOT things that go along with what we’re about at Robinson.  They shared the code with the class, and a great discussion ensued.

Then, just as if I’d paid them to say it, someone suggested that we write our own pirate code to follow that had the positive aspects (like the ones we had put on our learning like a pirate list).  What? Our own pirate code?  That’s a fabulous idea, 2nd grade! What?  You think that it would be like the Road Rules? Another great idea, Rm. 202 friends! 🙂

We got as far as making an initial list and will work over the next few days to whittle it down to the final points we think are most important.  We’ve got a pretty great list to start with, I’d say:

Can’t wait to share the final draft someday soon!  Come back and read it, will you? 🙂