What? This week I did MWUs every day?  Partly that happened because we actually had every day this week at school, but also because I moved the MWU to a different time of day and it made the timing easier (sometimes mornings can get a little crazy and sometimes I have other things I need them to do instead).  Now (at least for the time being), we’ve moved Writing Warm-Ups to the morning and Math Warm-Ups to right after lunch, and that conversation is then the beginning of our math time together (that part is still the same).  Confused enough now? Don’t worry–the big deal is that I have FIVE MATH WARM-UPS TO SHARE!!  They’re pretty great, too, so I’m glad you stayed through that long intro to check them out. 🙂

We have been working on subtraction lately, and my kiddos have started to do some amazing thinking with negative numbers as a means of figuring out differences.  It started with just a couple of friends a couple of weeks ago and now probably at least half the class has tried it!  The chart here is similar to the HTO model (which we called Sticks and Dots back then) we used in 1st grade, but connected to an investigation we did with the T-Shirt Factory and refers to the inventory of t-shirts.  The come in Boxes of 100, Rolls of 10 and then loose ones.  Same idea, but inside the context it makes much more sense.  Like most times, you’ll see we did it using two other strategies, as well.  The green numbers on top are from the strategy Making an Easier Problem, in this case by adding 11 to both numbers (which we know is possible because of the idea of constant difference).

We also tried it with Circle, Split, Subtract and modeled our thinking on a number line.

Another concept we’ve been playing around with is the inverse relationship between addition and subtraction.  This one also asked them to analyze someone else’s thinking.  We tried it by adding up…

…as well as with our negative number strategy.  Again, we got the same answer both times!

On Tuesday during math, I gave kiddos a check-in sheet to see what they could do on their own with subtraction, now that we’ve been working on it for a while together, and the last problem was a challenge problem.  Ok, it really isn’t that much harder (just another place), but I wanted to see what kiddos would do when I added 1000s to our work.  Landen and Ava decided to that the BRL chart would probably work the same way if you just added another column, and suggested that we try it together as a math warm-up the next day.  Great idea, kiddos! 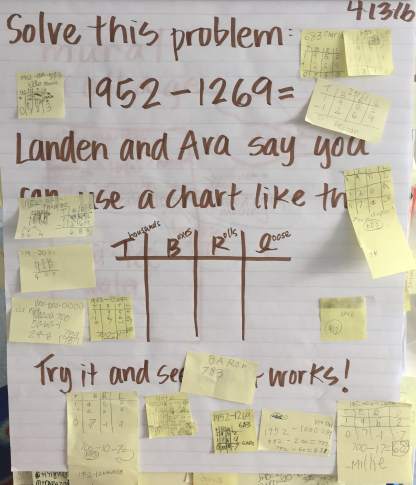 Somehow I took my picture before we had done our work on the chart, so you can’t see it, but believe me–it worked just like they thought it would.  Oh, and when I was using this chart again with someone later that day, we decided that instead of just T for thousands (which doesn’t fit the context of the t-shirt story), we’d say T was Trucks, because you could put 10 boxes on trucks.

We’ve been working on both geometry as well as subtraction in math for the last couple weeks (and some still also on money from our last unit), but I decided that we’d use the MWU as the start for our conversation by throwing up some geometry vocabulary I needed to emphasize.  So using examples and non-examples, I had them think about parallel:

They were able to figure out the meaning (for the most part), although many kept saying it meant “straight” and we had to clarify what they really meant, because ALL of those lines are straight….and while I don’t like math tricks, I did show them that in the word PARALLEL are clues to what it means: PARA for the PAIR of lines, and that the l’s make two parallel lines themselves (ok, well they do if they’re lowercase…see, told I don’t like tricks).

Today’s MWU was geometry again, related to work we’d done this week, as well as connecting to the work I knew I’d have them do during Math Workshop today.  Win/win! (Oh, and I realize now I mislabeled the trapezoid as a parallelogram.  Oops.  I’ll fix that on Monday. 🙂 ). 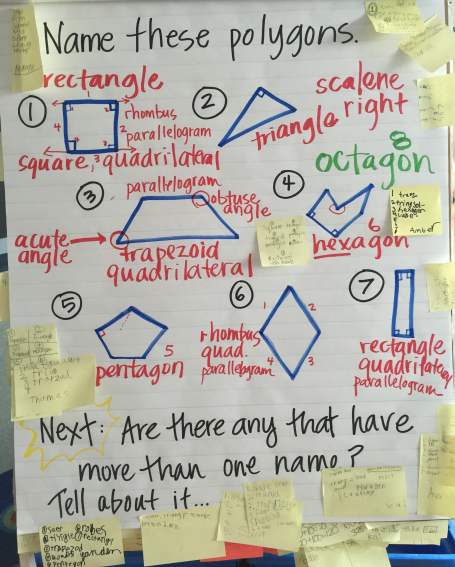 After this conversation we went on a great shape hunt challenge outside, but you’ll have to wait about it.  We’re not quite done yet.  🙂

Note: See that “next” on the bottom?  I’d tried many versions of that extra question this week on math and writing warm-ups.  It seems that when I put “bonus” there, kiddos thought that meant they didn’t have to do it. LOL  So I tried “next” and also “big ?” to help them see that they could do both of them. Or at least start thinking about the answer, since it would be what we’d be talking about anyway.

This week there are 4 warm-ups; we had a special parent visit on Friday morning and so didn’t get to one that day.  We’re still working on addition/subtraction and using efficient strategies.

The hope with the numbers in this problem was that kiddos would recognize the most efficient strategy was to use compensation (and so make the easier problem of 30+61 that they could answer in their heads), but any strategy was fine as long as they could pick one and explain it. 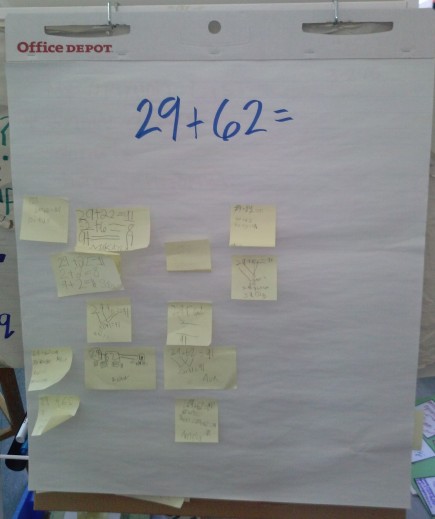 The other day, we discussed all the strategies we know how to use and tried them on the same problem.  We also talked about what we could call them so that everyone knows what we’re talking about (this was in response to a question I asked last week with our warm-ups).  So I decided that we’d try a specific strategy on a series of problems this week (but it should be noted that, as with the last problem, compensation is the BEST strategy for the numbers as you can create 81+20 and quickly answer using mental math). 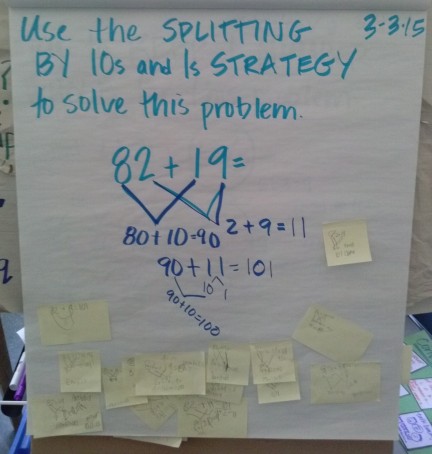 Besides talking about how to accurately use the strategy, we had a discussion about the difference between how you solve the problem (the strategy) and how you SHOW how you solved it (the model–in this case an open number line).

The thinking behind this problem is helping kiddos connect strategies they know for ADDITION with SUBTRACTION.  Many first graders need to be explicitly shown that what works for one works for the other.  Practicing using these known strategies can help stretch some past the draw-all-then-mark-off or counting backwards strategies.

These warm-ups got kiddos’ brains really moving this week!  Hope they work well for yours, too! Please leave a note and tell us about how you’re using them in your classroom, or how you’re sharing them with others. 🙂

Another short week of warm-ups because of MLK, Jr. Day on Monday, but the ones we had this week are goodies!  Read on and happy calculating!  Please let me know how/if you use these in your classroom!  Feel free to add your own warm-ups in the comments, too! 🙂 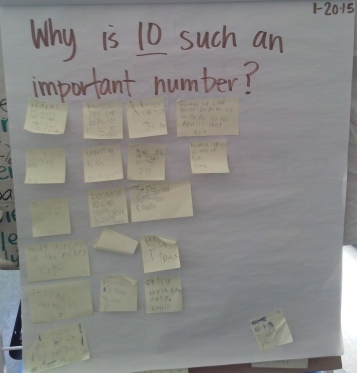 The unit we’re in right now is math is focusing on adding numbers within 100, and on using place value to do so in an efficient manner. My focus then, this week has been on how to create opportunities to think about tens in a meaningful way determine which strategies and models make sense in each situation.  This one was just a great place to start our conversation for the week because it has so many answers. 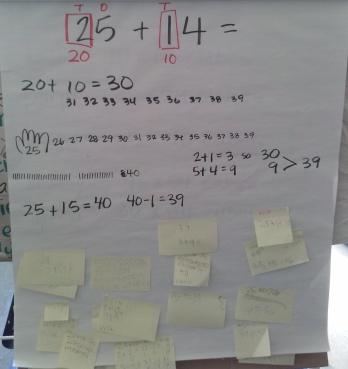 We’ve been doing many problems around scenarios, and I wanted to see what they could do with straight numbers–especially related to place value.  This was a great one to see what they know both about tens/ones, and what they know how to do with them.  You can see that there are already many known strategies and models floating around that we can build from as we go forward.  YAY!

We’ve been playing the 100s Game this week as we practice counting to 100 by different numbers.  We’ve had lots of practice with counting to 100 by 5s and then 10s (really fast!), but then we practiced counting by 10s and NOT starting at 0.  We used a deck of cards to decide what was our first number, then we went around and stopped at the number that was closest to 100 (for example, if we started with 6, then we’d say 6, 16, 26, 36, 46, 56, 66, 76, 86, 96).  This warm up was similar to the game we’d been playing, only I wanted to see if they knew what to do when they went over 100, so asked them to go as high as they could.  HA!  Man…were those numbers high!  One friend went all the way to 867 (and I think he only stopped because he ran out of time!), and many went to the 600s or so.  As we discussed the problem and did it together, I quickly found out that they did indeed know the pattern of how it works when you get into the 100s.  This will be so handy as we keep going, and many will modify their counting on strategy from numbers within 20 to counting on by 10s with numbers within 100. 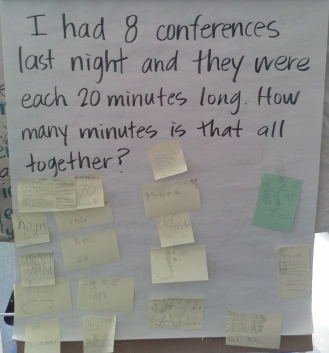 This one was a true story about how I spent my evening last night!  While it is really a problem to see what they can do with tens, it’s also the beginning of multiplicative thinking, as it’s also 8 X 20 or 20 X 8; either way, i want them to recognize that it’s 8 groups of 20, not 8 PLUS 20.  Most did a SUPER job of this and had great thinking about how to figure it out.  Several connected the 20 to counting by 2s, and some saw the 2 10s inside 20 and counted by 10s to get to 160.  The best part was that NO ONE sat and did nothing.  Everyone tried a strategy, and were willing even if they weren’t quite sure about the answer.  I LOVE how gritty these kiddos are!