I learned about the Marshmallow Challenge about 5 years ago and I’ve been doing it with classes ever since!  It’s always fun to see what a new class with do with the challenge–how they tackle it, how tall their towers are, what strategies they use to work as a team, etc.  Like with most years, we did it twice, with a debrief in the middle to help us think about what worked and what we could change. 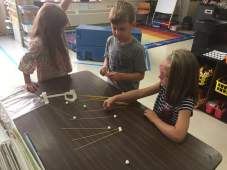 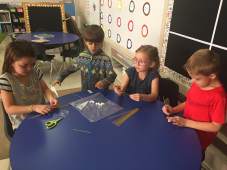 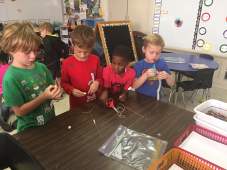 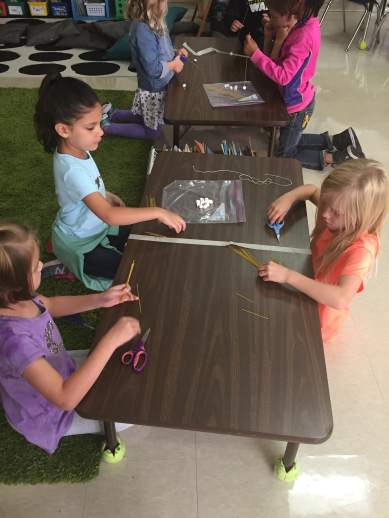 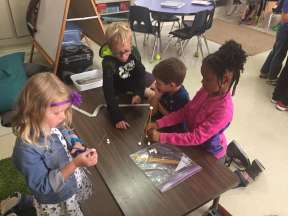 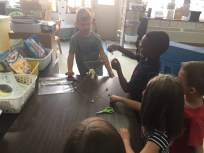 We had an ok start, and kids took pretty quickly to what they were supposed to do.  Teams (which I chose ahead of time and are groups we will use periodically all year) worked well and learned to negotiate who did what/when/how, etc.  After our first round–where all of the towers fell over–we talked together on the carpet: 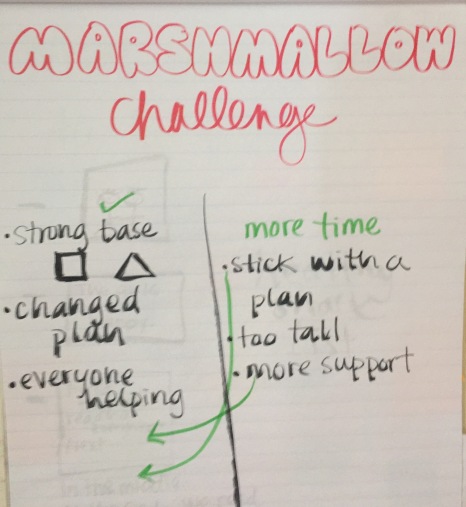 The black words are from our first conversation; the green arrows denote the things we changed that made our second went much better.  So yeah–spoiler alert!–we tried again and this time teams were much more successful.  Successful, we thought, meant that our towers stood up and everyone participated and helped the activity work.

Check out our 2nd go-round: 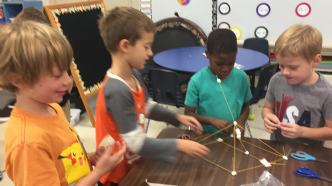 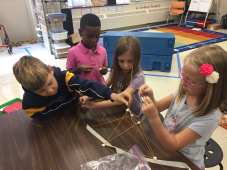 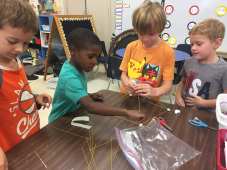 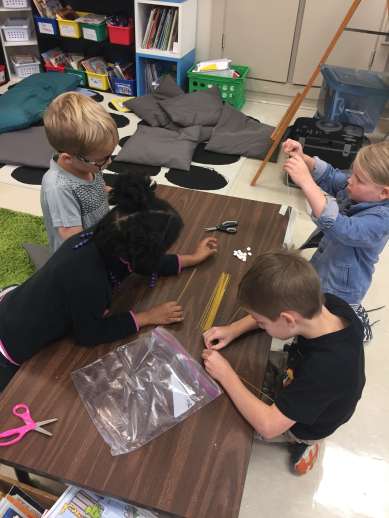 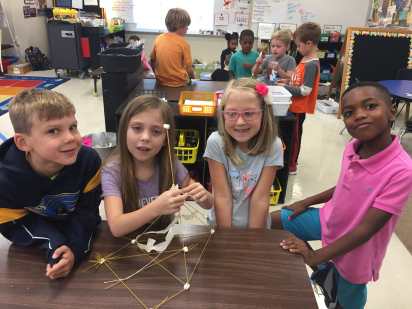 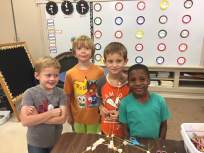 In 2012, Mrs. Hong brought the Marshmallow Challenge to Robinson.  Since then I’ve done it with almost every grade I’ve taught (5th then 2nd and now 1st graders!).  It’s been interesting to see what each group of kiddos excels with and which parts of the challenge are hardest for each group.

Just as a reminder, the rules are as such:

We used these same guidelines, except that kiddos had 25 sticks of spaghetti and we only had 15 minutes.  Otherwise, the challenge was the same.

We worked in our Crews, which are small groups we use throughout the year in different situations, but that stay the same all year long.   It should be noted that we hadn’t worked with this group for a while….

Anyway, groups got started and were off to the races.  For the record, I noticed that only 1 group decided to draw a plan before they got started. 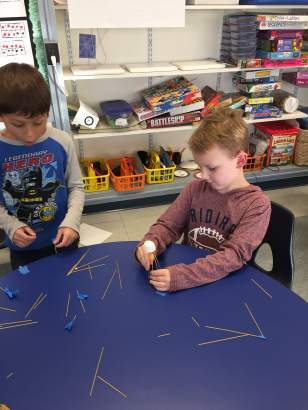 Kids had a variety of ways to tackle the challenge, with many groups thinking about squares as the base of the tower, but not quite figuring out how to connect that idea to the final product.  Many groups seemed to be working individually at the same table, rather than together on the final tower.

And at the end of the 15 minutes, we had these towers: 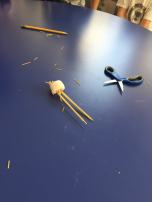 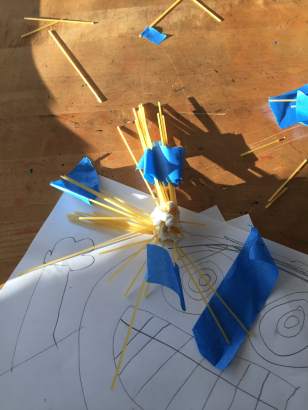 The only tower that was standing belonged to Crew 6.  And as you can see, there are not squares to be found, but many towers with lots of legs sticking out of the bottom of the marshmallow.

The next morning we debriefed this experience, thinking about things we’d keep the same (plusses) and things that we would change (deltas).  Perhaps it was because of how I asked them to think about the question (or perhaps just because we had a really hard time!), but there were not many plusses, just a team or two that said that Crew 6’s design was a good one.  No one mentioned anything that kiddos had done or how we had worked together that worked to make us successful.  We did, however, have many things to say about what we’d change.  Many kiddos from all the crews gave ideas, but basically the class agreed that we didn’t do a very good job of telling our groups what we were doing.  We didn’t share out ideas with our friends and pretty much were only concerned with our own ideas.  And so as you can guess, it didn’t go so well.

BUT, because we know that FAIL means First Attempt In Learning and because–since we are Roadrunners– we have grit and a growth mindset, we knew we could try again, change somethings and see how what happened differently.

The second go-round I had kids start with a 3-minute talk about what they would specifically do differently.  Most teams decided to draw a plan this time, too.

After 3 minutes, teams got busy building. 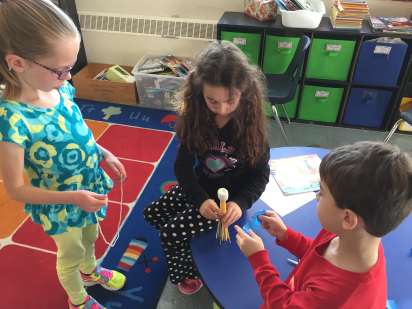 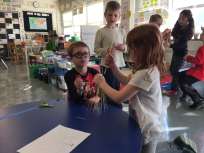 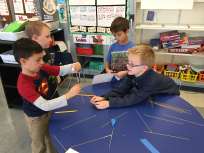 This try brought up a really interesting problem.  About 5 minutes in, I started to hear rumblings of teams who were “copying.”  Shortly I had heard from all the crews individually that someone from another team had “copied” their idea and stolen their plan for their tower.

We had to stop the clock and have a quick conference on the rug.  I had kiddos voice their concerns about what was happening and why they were upset.  Someone complained that another group was doing the same thing as they were. “So what?” was my response.  I’m pretty sure they weren’t sure what to say, so I pressed harder.  “Why does that bother you? Say more about why it’s a big deal that another team “stole” your idea.”  We had to then get to an understanding of the challenge, and that everyone could “win,” based on the way the challenge was laid out.  The idea was not for some team to be better than another one, but that it was possible for everyone to have an idea that was successful, resulting in a tower that stood up tall.  We talked about the idea of that old adage: “Imitation is the sincerest form of flattery,” and how when someone uses an idea you have, you should be proud (rather than mad) because it means they thought it was a good one.  Ms. Mimlitz and I gave honest examples of how many of our best ideas were inspired by things others had done or said.

I wonder if the angst was really because of a mental-model they all have (even at 6 years old) that “copying” is “cheating” and this is inherently BAD.  I would rather them learn that in many cases sharing so that others can be successful is a GREAT thing; when someone else succeeds, it doesn’t mean you have failed.  It actually doesn’t say anything about you at all!

After this little pow-wow, we got back to work, with teams asking each other about what they were doing, and visiting others’ workspaces to see another crew’s plans.  In the end, I believe that everyone had the same design (we’ll work on innovation and differences later, the big lesson this time was about sharing!), but I believe that most tables had a tower that was standing!  For sure we all ended this challenge with smiles on our faces, new understandings about success and excitement about solving our next problem!

Crew 1 and their tower 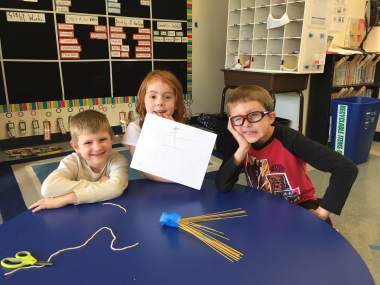 Crew 2 (I promise it was standing just before this!)

Crew 3 and their marshmallow tower

Crew 4–all smiles about their tower!

Crew 6 with smiles and a standing tower!

If you’ve been here for a while, then you are familiar with the Marshmallow Challenge that I’ve done a couple of times.  Both of the previous times it’s been attempted in Rm. 202, though, it’s been with 5th graders.  Well obviously I don’t have any of those anymore, so I wanted to see how my 2nd graders would rock this challenge.

Now, I must add that since most of us were here together last year, we had a little bit of an advantage, rather than doing with people who are relative strangers.  The activity, however, was new to everyone.

I gave them the same directions and supplies as have been given before:

I put everyone together in our new Room Teams, and their first job was to create a name for their team (which is new for us–last year we just went with numbers).  They were super creative, and came up with GREAT names like Cherry, The Blue Angels, The Legendary Black Dragons, The Golden Girls and the Lion Kings.  Cool, right?

Ok, so next step was to plan.  And that was fun to watch; each team had a different way of going about that: 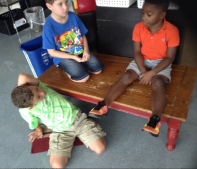 Lion Kings kicking back and planning

The Blue Angels sketching their ideas 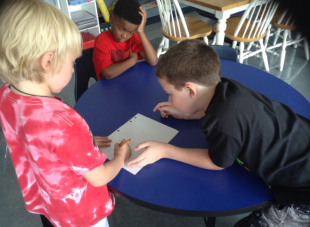 Legendary Black Dragons figuring out what to do

Once I said “GO” the fun began and the teams tried to create the tallest free-standing tower they could.  I was SUPER impressed with how well each team worked together and also with how they built on each others’ ideas.

When time was called and everyone stepped away, only one tower was still standing:

But we did go ahead and give a 2nd place nod to the Legendary Black Dragons for the height of their tower before it fell.  Check it out: 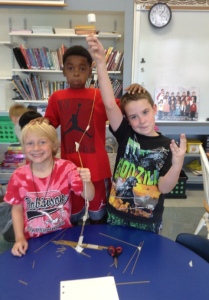 They admitted that they should have worked on making the bottom stronger. No worries! Next time. 🙂

Now…we could have walked away and left it there, but of course we could not.  We had a debrief on what worked and what didn’t, and talked about plusses and deltas for that activity.  Here’s our chart of what we said:

Our conversation after the challenge was perhaps the best part.  We could have said that most groups failed and that just the tower that stood was successful, but we were not ok with that.  We agreed that we had many points that proved that we were successful in spite of the fact that our towers fell over.  We had focused on the process and the product was not the biggest deal.  We have come back to this chart already a couple of times, too, and used some of the plusses for other activities together!

Last year, when my friend Genie told me about the Marshmallow Challenge, I was on board from minute 1.   I knew I would do it again this year, too, but just maybe a little later than my original plan from last year, based on our new plans for doing community building.  So this year, we waited a little longer, and today was Marshmallow Challenge day.

Just like last year, we worked within these guidelines:

Ok, well almost the same rules.  I realized when I opened the box that I had thin spaghetti, so I gave them 5 extra pieces. 🙂  The rest was the same.

First we reviewed our norms and the directions, then I set the timer and they set off to work.

At the end of the 18 minutes, everyone stepped away….and….we saw all but one of the towers fall. 😦

Now, while the stated goal of the challenge is to build a tower that stays standing, the real goal of the activity is to work well enough with your group that that other goal can happen.  So what we needed to find out is what happened that made it hard for us to achieve our goal today.  We met on the carpet to discuss plusses (things that we did that HELPED us do well, or that went well) and deltas (things we would CHANGE to make it better next time).

Here’s the chart we made:

We talked about our thoughts, and whether or not it was a coincidence that the 1 group whose tower stood is also the only group who put any plusses on our list.  Obviously, it was not a coincidence.

So my next question was “So what do we do next? What do we do with this information?”  The answer (from more than one person) was “Clean up?”  Well…yes, but that was not quite the level of problem solving I was hoping to hear.

So that’s what we’ll do.  And while we were not quite ready to take the Marshmallow Challenge today, someday–probably sooner than later–we will be.   And we’ll do it again. 🙂

Oh, but one more thing.  Here’s a pic of the group who was able to build a standing tower.  Way to go, friends!

Can’t wait to share this again when we have our Marshmallow Challenge 2.0–Take 2!