If you’ve been around here for a while, you have read about the punctuation studies I have done in 4th and 5th grades.   And if you’ve read much this year on this blog, then you know that one of my goals (or hopes at least!) for this year was to bring some of the things I did in 5th grade with me and try them in a first grade version.  So far, these kiddos are ROCKING it, and really impressing me with how quickly they catch on and then run with things I show them.  The punctuation study was another protocol that I brought with me and another one that they took and ran with!  Let me tell you more. 🙂

As with other classes, we started with a conversation about how punctuation carries MEANING, and is not just a bunch of rules that you follow (as a reader or writer) because someone tells you to.  This was pretty easy for them to start thinking about because they could tell you what the meaning of a period, question mark and exclamation marks are already.  Then, as with other years, their job was to find as many other punctuation marks as they could and figure out what they mean.  So with a partner and a pile of books, kiddos went to work investigating the work of other authors.  They filled in a chart together where they recorded the mark, an example and their thoughts about what it means for a writer to use it (and a reader to read it!). 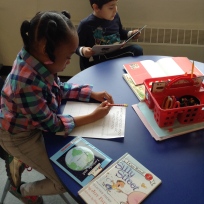 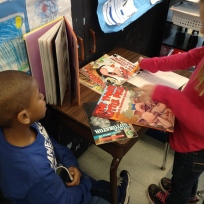 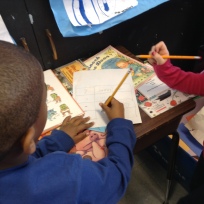 After a day or two of gathering info and doing some thinking, we started recording our findings together on a class chart: 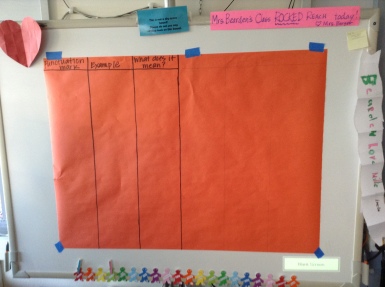 Our chart started like this when it was empty, similar to the sheets they filled out with their partners.

Now, what happened after that was super cool.  No really–check out what the first part of our chart looked like when they started putting their smart first grade punctuation thinking on it:

I was a little surprised that they didn’t start with periods. Instead, they started to tell me about what they knew about exclamation points.  But then look, instead of just finding one way to use an exclamation point (like 5th graders usually do), these super smart writers found 5 WAYS to use one. AMAZING!

We kept going, adding quotation marks, an ellipsis (which is always a fun one to learn the name for!) and parentheses (I mean come on–are these really first graders??).

Eventually we did get to talking about periods, but even with that one they were able to find 3 different meanings, including how sometimes people use them exaggerate how a. maz. ing. something is! 🙂  Then they blew my mind again and added a hashtag (do you sense a theme here?).  Now I don’t know if it’s just because we’d been talking about Twitter lately, or what the reason was, but my “big” kids never put a hashtag on their charts.  First graders love it when you tell them that, too, by the way. 🙂 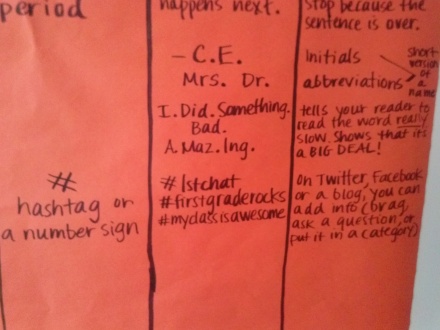 We had a little big of paper left (although I have a whole new blank one waiting for us to fill up!) and so we started talking about “that little mark that is a line.”  Now, what I knew (but they didn’t yet) is that they could have been either talking about a hyphen or a dash, and that those are actually not little marks at all.  So we did some more work to dig into the meaning.  We started with a hyphen (although at that point they still didn’t have a name for what the mark was).

Since we had just gotten our iPads, instead of writing down our examples, we got to work collecting some examples simply using the camera app.  Their directions were to look JUST for that little mark and to take a picture of any examples they find.  Then we would reflect those pictures on our ActivBoard to discuss together what they are used for.   What we quickly found were many examples of how hyphens are word-connectors.  They can be used to put two usually unrelated words together to make new words that describe other things (like full-fledged, top-rate and ex-princesses) or to break up a word when you don’t have enough space to finish the word on the line you’re writing.  They also found this part being used in a dedication page, as well as when I was making a list of our hyphenated words (and I did this without even knowing it–they were definitely paying attention!).   We aren’t even done yet, but our chart is filled up and now looks like this (SUPER sorry for the hard-to-read, end-of-the-day photo):

The best part of this study is that our minds are now always thinking about (and noticing) who writers are using punctuation.  We even found it on our friends’ clothes!! 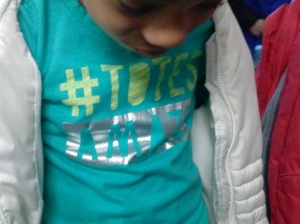 And just as I sat down to write this blog post, I got an email from Charlie’s mom about how he had found a hyphen in the book he was reading.

Can you spot the hyphen? Do you see the dash, too? 🙂

UPDATE!!:  We added more today…they are tickled that they have so many ways to use a comma, AND that they put a caret (which is yet another thing that 5th graders haven’t mentioned before but 1st graders did!)