It seems that the later we get into the year (or maybe it’s just that we’re at the end of a math unit), the less interesting our warm-ups are.  I mean I guess they’re not for entertainment, but I guess I’d like for them to be fun and motivating.  We’ll see how well we did with that this week…

Guess we didn’t have a one on Monday.  Must have been a busy morning (is it bad that I can’t remember back to LAST WEEK?)

We continued on with data here…

And then I showed how I would represent this data and we discussed what we learned from it, as well as other options for showing what the data tells:

Besides giving us practice with adding (and with bigger number!), and reminding us of some math vocabulary, this equation held some significance for our class.  Only I can’t tell you what it is until after Monday morning….sorry. 😦 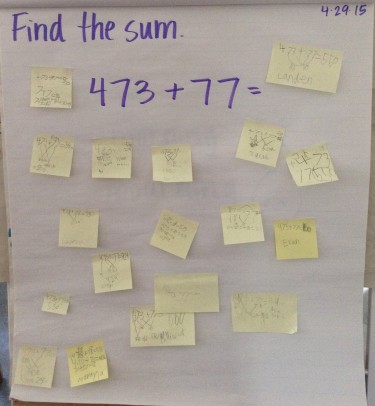 We had a fabulous field trip first thing on Thursday, so no math warm-up.

I think I’ve mentioned before, but one thing I love about how we do math warm-ups is when kids start to apply things you’ve learned (or are learning) during the unit to their work here.  For this one, I mean that someone thought we should have a t-chart to help us organize our thinking and our data.  It’s super easy to see that most kids in our class are 7.  🙂 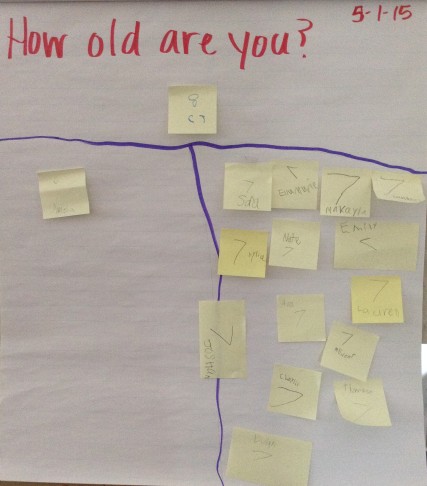 This was a short week with only 4 school days anyhow, and I was gone for one of those, so only 2 warm-ups this week, friends.  Still working on data collection….

The warm-up for this morning directly tied to our work in Math, as it was the basis for a formative assessment.  We had been working on collecting, organizing and analyzing data for many days in whole group and partner situations, and it was time to try it on their own.  It’s hard to see, but there are names signed on each side of the t-chart.  We skipped the post-its on this day to make sure the data didn’t change before we could analyze it (we do this EARLY in the day and hours pass before we talk about it).

Ok, so we really didn’t spend 3 days doing this one, but with a strange week, we did it on Tuesday morning, but didn’t have a chance to discuss it until Thursday afternoon.  The conversation we had around the analysis is documented on the sheet; the post-its were how we “voted.”  This is good stuff here. 🙂

So I missed posting last week’s math warm-ups because my phone has decided not to talk to my computer (which, I believe is a ruse to make me finally give in and get an iPhone–everything else I use is Apple anyway, so I guess it only makes sense…) so I can’t show you the pictures I took.

Well, it seems that wasn’t so big of a deal anyway, because there have been lots of math activities (not just warm-ups) that have been related to data collection, and this way I can connect them all.  Bonus. 🙂

We began several weeks ago, as I knew we’d be launching into a unit on data collection and analysis, to try our hand at some easy surveys in our math warm-ups.  We talked with the very first one about the idea that we’ll be collecting, organizing and analyzing data (and what all of those things mean).   Then we spent many days answering survey questions, and doing just those things: 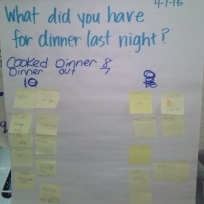 After we’d had some practice with the actual answering the question and orally analyzing the information, we started working on how to represent that information.  Thanks to my friend Mrs. Appelbaum (remember her, with the AWESOME name and the great idea for webs in writing/science?), I had a really good visual to show my kids the expectations for what they should be able to do with both describing and representing data by the end of this unit: 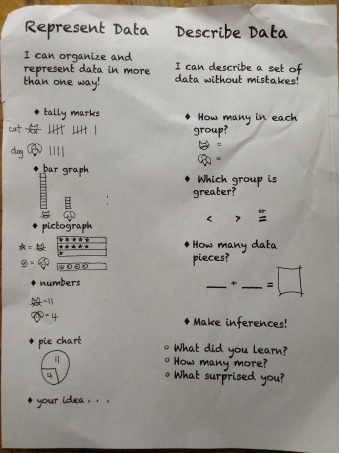 I think the best part about this checklist is that a kiddo in her class asked her to make it so he’d remember what to do.

This checklist was the next step for us and with it we began to look at how to SHOW what the answers were, especially to people who weren’t there in our class when we took the survey (this meant that they would have to be clear and concise).

We had a go at the idea with that question about cereal and pancakes, trying it ourselves and then coming back together and trying many different ways that were on Mrs. Appelbaum’s sheet.  WOW–look at all of those ways to say the same thing:

Today’s work was really cool as 3 friends decided to start organizing it AS we were collecting it.  Jacob, Lauren and Amelia made the paper into a t-chart and even put labels so kiddos would know where to put their answer:

We showed the total with both tallies and numbers, and then also tried a pictograph:

We also talked about the part of the checklist where we make sure to show how many people took the survey, which we did by adding the totals of both columns.

Today we took a fun and important step and began to do surveys on our own!  We reviewed the steps and then worked with a partner to plan the question we’d be asking, using these ideas for stems:

Tomorrow we ask the question of our friends and start collecting data!  Stay tuned for the fun! 🙂