For my son’s 7th birthday I promised him a “new” room.  He had grown out of his “big boy” transportation room (which was really just a more grown-up version of his nursery), and needed something that could last a few more years as he got older.  As may 7YOs, he was TOTALLY into Lego, and it seemed a likely theme that would work for now, as well as for many more years.  I knew that if I made sure the background was neutral and the “changeable” stuff was where the Lego came in, that would also ensure that he’d have longer before it was dated.

Well, lucky for me, I had just painted my living room/kitchen in a fabulous gray color that is pretty close to the color of Lego base plates, and had almost a gallon leftover!  This was the foundation we needed!  The walls were quickly gray and then I worked to figure out bedding, curtains, arts, etc.  I was hoping to sew most of it, but who knew that Lego doesn’t have fabric?  Well maybe somewhere and it sells for hundreds of dollars a yard, but I could not find any in the traditional fabric stores around me, or anywhere I could think of online.  It ended up being a blessing in disguise, however, because we ended up finding options that were far more basic, and which allowed me to be a little crafty.

We landed on this bedding, and I found the pillows (and some other ideas we didn’t end up using) here.   It is reversible, too, so I think right now it’s even turned over the other way.

Found this as a bed-in-a-bag on sale at Target! Bonus! 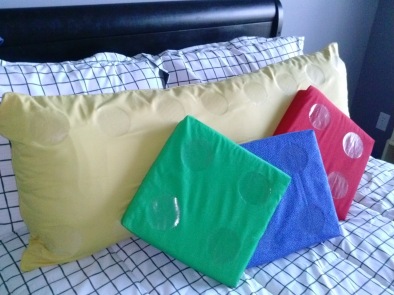 The yellow is a body pillow, and the others are just square foam inserts.

For art, we had many ideas, but only ended up using a few of the ones we started with.  One was pretty basic, and is just paper, made to look like Lego 2x2s, and the other stuff we added is not Lego-related, but is instead kid-made art from my master builder’s work at school.  Made it even more special!

We used record album frames because they’re cheap and the size shape!  Just paper, with paper glued on top. 🙂

Every year our art classes do a project through Art to Remember, and parents can buy all sorts of “stuff” with their kid’s artwork on it.  We have ornaments and magnets and other things, but decided to use the original pieces as room art.  There are two empty ones because he has 4th and 5th grade to go!  (And yes, I realized they are neither perfectly-spaced or entirely-straight, but for now it’s working pretty well!  (That’s the closet wall)

Ok, so that’s all well and good, right, but I know you’re asking “so where’s the Lego organization part?” Well, ok, I promise it’s coming, but first I must sneak in a little bit of info (that you may have already figured out), and that is the fact that my 7YO just turned 9.  (We are a little slow to finish things around here! LOL)

Part of our problem was that the Lego organization was the project that required the most work and planning in order to complete.  We had ideas for adding a window seat with cubbies, that would allow for block storage as well as a place to play.  We did LOADS of research, and finally decided upon buying pre-made shelves that we turned on their sides so they’d fit under the window.  The detail that took me FOREVER to figure out, though, was that there is a vent right in the middle of the floor under the window.  We didn’t want to cover it up, and couldn’t decide how to deal with it.  Somehow, 2 years into it, I figured out that just adding legs to the cubbies would raise them above the vent, as well as making them the right height for the window seat we wanted.  A couple of coats of black paint (to match the other furniture in the room) and voila!  Win/win.  Well except that he waited on it for 2 whole years. 🙂

Again, though, as we like to find the positive in all things, the two years he has spent collecting and building with Legos actually helped us in completing this project because of the knowledge he’d gained and the opinions he had on how he wanted his Legos organized.

Oh, and those two years also afforded him time to collect thousands and thousands of tiny bricks and so many specialty pieces I can’t even begin to tell you how many there are (most of his Legos come in sets, which contain loads of really specific blocks).  And those thousands of blocks have been living in a giant under-the-bed sweater box like this:

which meant that our first job was to pull out every. single. piece. and figure out what we were working with.  After that, we could decide what kinds of containers we needed to put them all away again.  This step honestly took two full 8-hr days to complete.  And it was mostly me working on it.  Yep, the kids were there to start us out, but they quickly had much less energy (or excitement??) for it than me.  I was bothered by this for a minute, seeing as it seemed like it was more for me than for my master builder, but I think it was just too big of a job for kids to be able to finish.  They couldn’t exactly see my vision for the end-product anyway, and so this detail-oriented part was ok for me to finish on my own.  The introvert in me kind of likes that sometimes anyway. 🙂

I spent much of last week surrounded by lots of little boxes and piles of different kinds of Lego bricks.

In the time when I was doing my first round of research for how to organize our blocks, I found many examples of how moms had used IKEA products, and honestly they were all very nice looking.  And probably very expensive.  But, they also didn’t look very user friendly.  Most were organized by color…which I’m pretty sure is not how most kiddos build (or at least not mine….seems more like something a mom would do for herself, not for her kid.  Regardless of how other families did it, though, that method was not going to work for our mounds of Lego bricks). I mentioned that those 2 years gave my builder time to really understand himself and his preferences and this was great as we sorted through them all.  So I started by asking him what he thought we should do, and he agreed that color didn’t make sense, and that instead, we should do it by type or size of block.

After those 2 days of sorting, an afternoon of planning for containers and then shopping (we ended up choosing Sterilite containers that I found for a steal at Big Lots), gave us what we thought ended up looking great and being REALLY user-friendly.  I have been told by my kiddo that it is working really well, and I would agree, since every piece has it’s place now.

And the best part is that there are labels on each box, that art both specific to our Lego pieces and our names for them.  Yep, there’s a box for “slanty” Legos, and one that says “holey” and well as once that just says “special,” which he uses for particular pieces he’s pulled out for a project and isn’t ready to put back in their appropriate box yet. 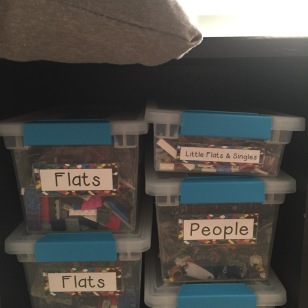 Oh, wait, and the top has a dual-purpose, too: it’s both for building and for reading.  We added two base plates to the top of the middle (attached with velcro), and I made pillows to cover the whole thing for when they’re not being used from a sheet I already had, and a tutorial I found here. 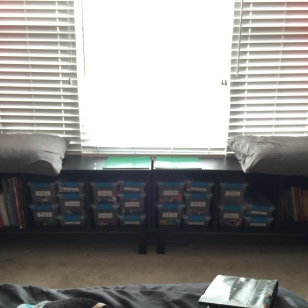 We are so happy with our final product, and it’s a part of our house that gets used (and cleaned up up!) every day. 🙂 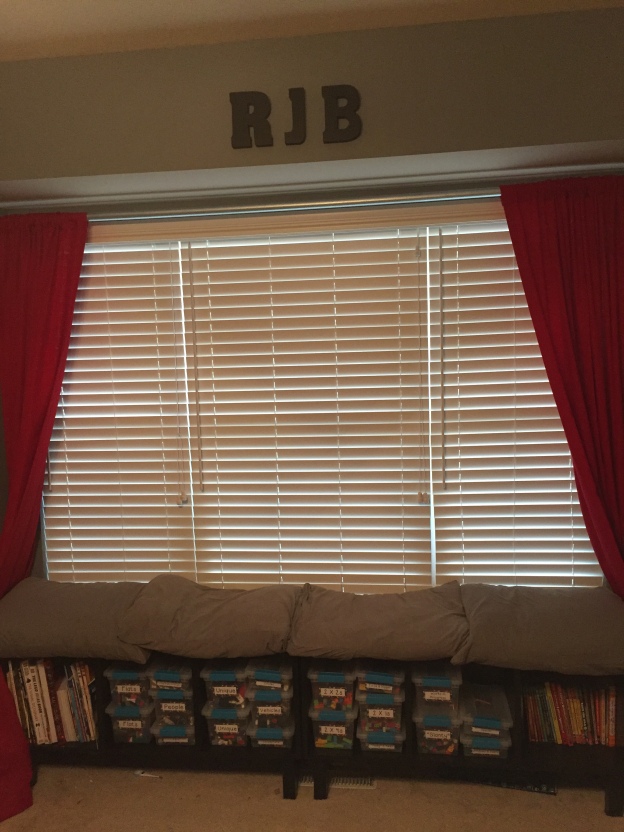 3 thoughts on “Lego Organization: From a Builder’s Perspective”