It’s similar to the Marshmallow Challenge that I’ve done several years with my 5th graders: build something really tall with your supplies and your team, using cooperation and problem-solving.  Great idea for any group of kiddos, but I especially love it for littler ones who are just beginning to learn about what it takes to work together, try something and have it fail, then rework the plan to try again.  This activity fits the focus we have on being gritty, as well as having a growth mindset and trying even when things are hard.  And yes, the first time we did it, it was hard. 🙂 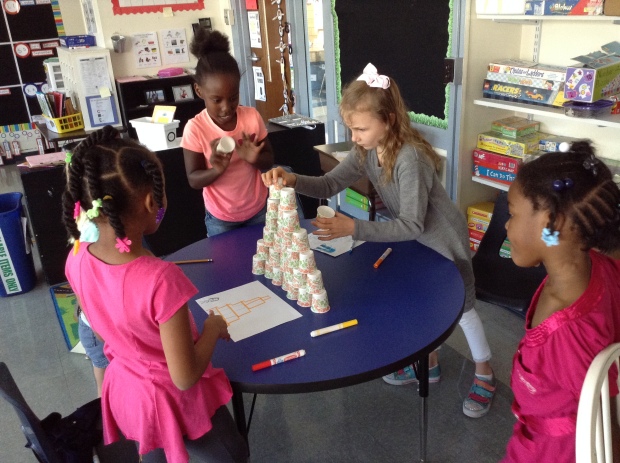 The first time we did this challenge, kiddos had 30 cups, their small group and 12 minutes.  Most thought they were done in about 2 minutes, and most used the same strategy.  Do you see how all the towers look the same?  One thing that also happened during this is talking.  Loud talking.  And much arguing about what to do next.  So when we were finished with this first try, we sat together to talk about it.  We talked about plusses (things that went well) and deltas (things we could change next time):

They noticed that our list of things to change was REALLY LONG and go busy thinking of ways to do things differently when we tried it again. (When I mentioned that we could do it again, by the way, there were many cheers from the rug!) Working on the floor instead of tables was suggested, as well as not being able to leave your own team’s spot.  We also agreed that they would get one warning about their voices and then any teams that were still loud would have to work the rest of the time in silence.  Oh, and one more change was more time–they got 18 minutes instead of 12 (which was really the original plan anyway, we just ran out of time). 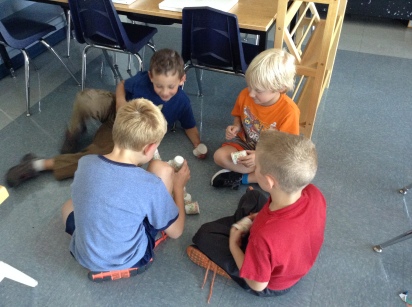 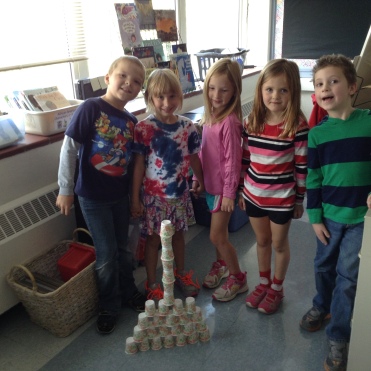 Check out our chart the second time around.  They were SO EXCITED about how the columns had changed!

What a change that happened when kiddos reflected on what worked–and what didn’t–and then planned how to redo the challenge in a different way.  I’m excited to see all of the many things they learned here, and how those lessons touched so many subjects at one time! Way to go, Rm. 202 kids! 🙂

One thought on “Cup Stacking Challenge”