We love Bill Nye!  You know, the Science Guy?

Well, we had a visit from our very own Bill Nye, who’s real name is Mr. Browning.  He LOVES physics and LOVES to talk about it, and we LOVE to learn, so it was a match made in heaven.  He came today to teach us about Newton’s Laws of Motion. 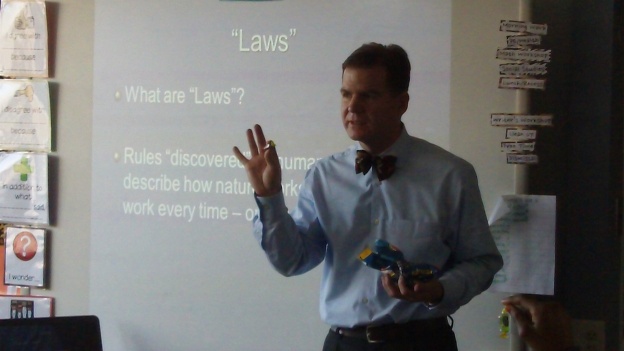 One of the things we loved about Mr. Browning was his enthusiasm.  He was really excited about this, and that made us excited, too.  Plus he had props.  Lots of props.  Props that he used to guide us through activities that modeled what we were talking about.  He also shared some really interesting videos from the ESA that showed Newton’s Laws in the gravity-free environment of the International Space Station.  What a great day!

An object at rest stays at rest and an object in motion stays in motion with the same speed and in the same direction unless acted upon by an unbalanced force.

Mr. Browning (with Rosalee and Rebekah) in action:

For every action, there is an equal and opposite reaction.

FOR SURE we will remember this day and Newton’s laws for a long time to come!  THANK YOU, Mr. Browning, for making science fun and exciting. 🙂

Now it’s your turn: what did you learn about Newton’s Laws of Motion? What else can you teach us about Newton?  What’s your favorite thing about science?  We’d love to hear from you!

7 thoughts on “Our Own Bill Nye”